The Basketball Japan League –of which the Ryukyu Golden Kings are the reigning champions—is celebrating its 10th anniversary this season, bringing new faces, teams and a major sponsor. 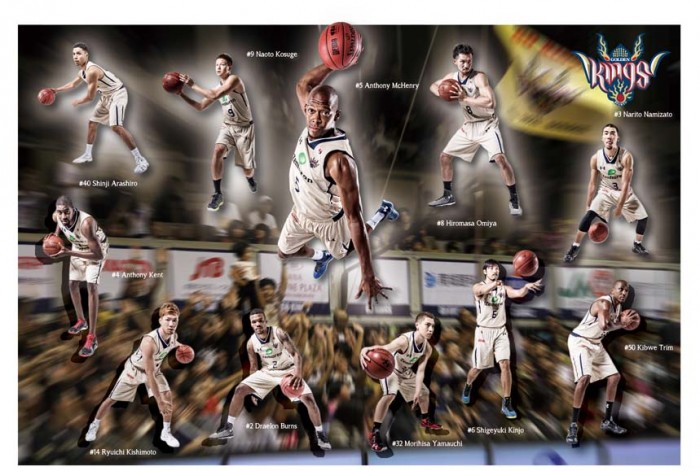 The Ryukyu Golden Kings’ team for the season 2014-15, of whom two are new faces while three players from last year’s team left.

For this and next season, the league has a new major sponsor, Turkish Airlines, and as the naming rights go with the sponsorship, the bj-League is now known as the Turkish Airlines bj-League, or shortly TK bj-League. With 247 destinations, the airline is the fourth-largest carrier in the world by number of destinations, and is building its brand image in Japan through the coveted age groups who pay attention to basketball.

The Fukushima Firebonds have joined the TK bj-League this season, bringing the total number of teams to 10 in the Western Conference while the Eastern Conference has 12 teams.

Okinawa’s Ryukyu Golden Kings recaptured the league championship last season and now hold three championships, the same as the Osaka Evessa. If the Kings grab the championship again this season, it’s the first second consecutive win for the Kings and the highest number of championships in the league. The Hamamatsu Higashi Mikawa Phoenix also holds two championships and could be in the same boat as Osaka and Ryukyu if they win.

For this season, three players of the ast season&s championship team opted to leave while two new payers joined the team. Most notably, Jeff Newton left the Kings after the last season ended, the only player to have the experience of winning a total of six championships in the bj-League.  He won playing with Osaka and Okinawa, but because of his knee injury he lost much playing time on the court in last season and decided to leave.

Yoshiki Yamashiro retired. Masaya Karimata moved to a fresh squad with the Fukushima Firebonds. New faces have been added to Kings roster, including Hiromasa Omiya, who came from Kumamoto Volters of the Japan Basketball League. He is a 197cm tall 92-kg forward. Because of his physical size he can stand up well even against foreign players, and his quick and dynamic play is expected to help the Golden Kings a lot.  Anthony Kent joined the Kings, too. Kent is a 208-centimeter, 103-kilogram center. He should be tall enough to fill Jeff’s position.

Head Coach Tsutomu Isa keeps handling the reins of the Ryukyu Golden Kings this season and says, “We recaptured the championship last season and are feeling very good now, but we should have a tough mind or it will be easy to lose because all other teams aim to beat us. We changed some members from last season, and I think we have a taller team than ever before, and also a good, quick style. The key point is how to keep up speed and be quick in both offense and defense. The Kings theme is always ‘Cheer Okinawa Up’, and especially this season’s theme is ‘Exciting Kings and Heart Beating Kings’.”  The second-year head coach promises “We will play basketball with all our best, and show both entertainment and impression, so please cheer for us as we play together this whole season!”

The first Golden Kings home game is this weekend in the Naha City Gymnasium against the Shimane Sunsanoo Magic.