Golden Kings falter on the road 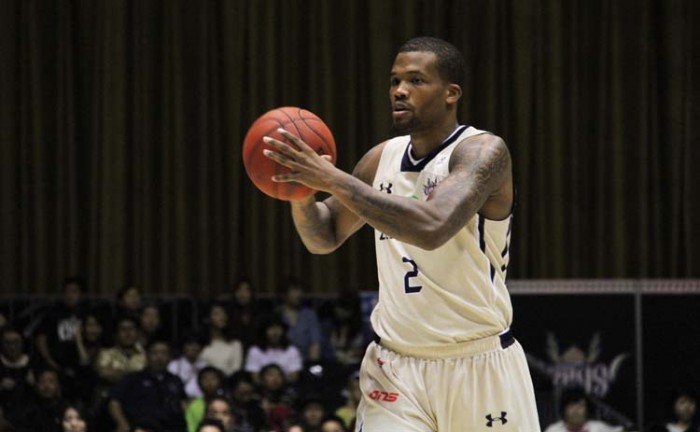 Draelon Burns found the groove on Saturday scoring 19 points and together with team mate Narito Namizato ensured a win for the Kings.

Riding a five-game win streak, the Ryukyu Golden Kings headed to Kyoto, where they picked up their sixth victory in a row before losing momentum and falling Sunday afternoon to the Hannaryz.

Okinawa battled to a 28-28 half-way tie in the series opener, a low scoring contest that finally tipped the Golden Kings’ way by holding Kyoto to a mere ten points in the final stanza, eking out a 66-56 win.  Draelon Burns was the sparkplug for Okinawa with 19 points, while teammate Narito Namizato garnered 16 and Anthony McHenry rolled to double digits with 10.  Kyoto struggled, missing 13-of-14 three-point attempts.

Sunday afternoon Kyoto was fired up, with Shun Watanuki acing 8-of-10 shots from around the court to lead the Hannaryz to a 75-64 win over Okinawa.  Ryuichi Kishimoto scored 16 and Anthony McHenry 15 in the long afternoon, while Kibwe Trim and Draelon Burns each tallied 10.  Kyoto outpaced the Golden Kings 40 points against 19 in the second and fourth stanzas, adjusting against Saturday’s mistakes and capitalizing on a more aggressive approach to the second game.

Kyoto moves to 7-1 on the season, while Okinawa slips to 6-2.  Hannaryz head coach Honoo Hamaguchi wasn’t taking the victory lightly, praising Okinawa, saying “We felt the Kings’ strength throughout the game.  Tsutomu Isa, the Golden Kings bench leader, thought his boys “played the winning game with a different level than usual, good that we could do our defense and it was a good game.”  That was Saturday. Sunday Isa had to temper his thoughts, acknowledging “Kyoto showed their good aspects, and Kyoto played well with the game going on Kyoto’s pace.  We must spend time to perfect our game through efforts in practice.”

Elsewhere in the Turkish Airline bj-league, the Hamamatsu Higashimikawa Phoenix were red hot, hammering Rizing Fukuoka 88-76 and 77-60 to improve to 7-1.  Fukuoka’s struggling this season, and is now 2-6.  The Toyama Grouses were likewise burning up the hardwoods, thumping the Shinshu Warriors 108-88 in the opener, and 95-80 on Sunday.  Toyama is also 7-1 now, while the Warriors drop to 2-4.  The Osaka Evessa also found themselves on both ends of a winning series, defeating the Shimane Susanoo Magic 85-77 and 73-70.  Osaka’s victories even their series at 4-4, while the Magic are in the cellar at 0-8.

The Aomori Wat’s picked up a pair of wins to improve to 6-2, outlasting the Tokyo Cinq Reves 89-79 and 76-57.  Tokyo’s now 3-5.  The Iwate Big Bulls were double-winners over the weekend, outdistancing the Yokohama B-Corsairs 81-71 and 75-72.  The Big Bulls are now 7-1, while the B-Corsairs drop to 3-5.  The Niigata Albirex BB rolled to an easy series opener against the fledgling league newcomers, the Fukushima Firebonds, 89-77, and then did it again, 82-75, on Sunday to send Fukushima to a sixth straight defeat.  The Albirex BB are 6-2 while the expansion Firebonds are 1-7.

The Sendai 89ers spared no mercy as they pounded the Saitama Broncos 87-66 in their season series opener, then were really harsh on Sunday with a crushing 103-50 win to extend their record to 5-3 while Saitama joins the cellar dwellers at 0-8.  The Akita Northern Happinets were happy at home, slipping past the Gunma Crane Thunders 82-77 in the opener, and 98-82 in Sunday’s series wrap up.  Akita’s 6-2 now, while the Crane Thunders are the third of three 0-8 teams in the league basement.

The Oita HeatDevils needed overtime to get past the Takamatsu Five Arrows, 88-86, in their season opener in a match-up between two lowly, struggling squads.  The Five Arrows bounced back Sunday, pulling off an 81-67 win that allowed their record to improve to 3-5, while Oita dropped to 2-6.