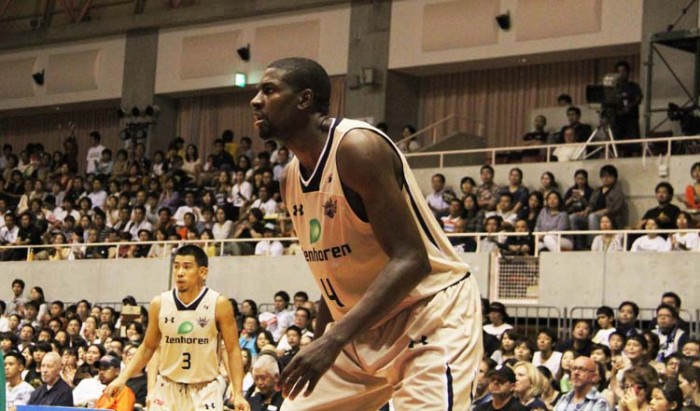 Anthony Kent is the new big man (208cm) in the Golden Kings’ squad.

The Ryukyu Golden Kings jumped strong out of the starting blocks in their season opener on the road, upending Western Conference foe Hamamatsu Higashimikawa Phoenix 77-67 on Saturday.

Veteran Anthony McHenry was the Okinawa sparkplug, pouring in 20 points to lead the Turkish Airlines bj-League champions.  Ryuichi Kishimoto added 14 and Draelon Burns 10 as they lead at halftime by a comfortable 42-24 margin.

It didn’t go so well less than 24 hours later, as the Phoenix were hot from the free throw line and shut down the Golden Kings power offense to grab healthy 82-68 win from the visitors to Toyohashi.  The Phoenix picked up 20 of 22 free throws while Okinawa was able to muster only 19 for 35.  Draelon Burns was on top with 14 points for the Kings, with teammates Anthony McHenry scoring 12, Ryuichi Kishimoto 11 and Anthony Kent nine points.

Elsewhere in opening weekend league action, Fukushima went down to defeat at the hands of the Aomori Wat’s 82-70.  jIt was the Fukushima Firebonds’ first game in the Turkish Airlines bj-league.  The Firebonds bounced back Sunday, claiming their first franchise victory, a 66-64 squeaker.  The Takamatsu Five Arrows easily outpaced the Nara Bambitious, 87-72 and 84-82 to sweep their season openers on the road.

The Toyama Grouses opened with an easy 81-63 win over the Yokohama B-Corsairs, but found the Sunday going a bit tougher, losing 87-79 for the split.  The Akita Northern Happinets got their season off to a bright start with a 57-49 win over the Niigata Albirex BB.  Niigata evened the score Sunday with an 86-80 victory to even the series.

The Shiga Lakestars outdistanced the Shimane Susanoo Magic 91-78 in their opener, then did it again Sunday, 77-65, to sweep the series in Kusatsu, Shiga Prefecture. The Iwate Big Bulls started their season on a winning note, besting the Sendai 89ers 74-64.  The 89ers roared back Sunday, capturing a 77-69 win to split the series.

The Osaka Evessa and Fukuoka Rizing split their opening weekend series, with the Evessa drawing first blood with an 87-77 win.  The Rizing, stung by the opening loss, ripped the Osaka squad 95-69 in Sunday’s game.  The Kyoto Hannaryz came on strong in this first weekend, whipping the Oita HeatDevils 72-63 and 76-57.  The Tokyo Cinq Reves swept its series against the Saitama Broncos, winning first 90-75 and then a Sunday win against the Saitama Broncos, 84-74.