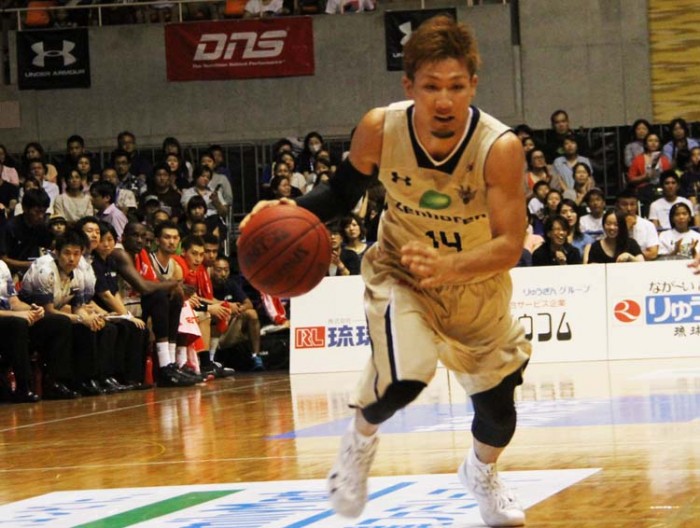 The Ryukyu Golden Kings had a few heart-stopping moments in Takamatsu before they began demonstrating championship form and pulled out a pair of wins over the Takamatsu Five Arrows.

It took an off-the-bench spectacular performance by Draelon Burns to win Saturday’s contest 83-75, and a 10-for-10 display of hot free throw shooting by Ryuichi Kishimoto to pull off Sunday’s 84-65 win.  Burns popped in six three-pointers to allow the reigning league champions to pull ahead in the first game of the series, while Kibwe Trim was equally on fire as he went nine-for-nine shooting.  Anthony McHenry added 15 points, 10 rebounds, four assists and a pair of blocks.  Anthony Kent contributed ten points while teammates Narito Namizato and Ryuichi Kishimoto each added a half-dozen points.

Sunday’s win was a bit easier for Okinawa Head Coach Tsutomu Isa, who after the first squeaker said, “The content of the game was not good at all.  We had almost no defense.”  The second match started rough, with Isa pointing out, “We could not catch a wave due to our own mistakes.”  The Golden Kings fixed the mood and rolled to an easier win behind the shooting of Kishimoto, who scored 22, 13 from Draelon Burns and Hiromasa Omiya, and ten from Narito Namizato.

The Golden Kings are now 3-1 on the young season, and heading home this weekend for a series with the Shimane Susanoo Magic at the Naha Gymnasium.  Following Sunday’s game, the Golden Kings will honor Yoshiki Yamashiro with a retirement ceremony.  Yamashiro’s been with the Golden Kings since the team was formed in 2007; he’s played all seven seasons with Okinawa.  The Golden Kings say the first 3,000 fans in the audience will receive a Yamashiro memorial badge at the game.

Elsewhere in the Turkish Airlines bj-league, the Shiga Lakestars notched a two-game sweep of the Gunma Crane Thunders, 96-85 and 83-72.  Playing on the road, Shiga trailed at halftime of the first game, 43-41, before reeling off 33 points in the third quarter to take control.  The Lakestars are 4-0, while the Crane Thunders are 0-2.  The Shinshu Brave Warriors demonstrated fierce attack skills against the Yokohama B-Corsairs, thumping them 105-90.  A day later, it was all B-Corsairs, who held the lead more than three quarters of the game to win 95-71.

The Niigata Albirex BB took on the visiting Saitama Broncos, sending them to 0-4 with a pair of wins, 73-64 and 72-44.  The Nara Bambitious outlasted the Osaka Evessa 91-79 in their opener, and did it again in the second, clobbering the visiting Evessa 86-68.  Nara’s now 2-2 while Osaka is 1-3.  The Kyoto Hannaryz dumped the Fukuoka Rizing 81-54 and 83-49, dropping the Rizing to 1-3.  The Hamamatsu Higashimikawa Phoenix rolled over the Shimane Susanoo Magic 70-49 in their series opener, then held on to win their Sunday afternoon contest 76-72.  Shimane falls to 0-4 while the Phoenix are at 3-1.

The Iwate Big Bulls were on fire, beating up on the visiting Fukushima Firebonds to sweep their series 91-57 and 69-59.  The Big Bulls are 3-2 while Fukushima is 1-3.  The Akita Northern Happinets split a pair in weekend action, losing Saturday to the Sendai 89ers 90-76, but rallying 81-69 to win on Sunday.  The Aomori Wat’s needed overtime to pull out a 92-85 win over the Oita HeatDevils in their series opener, but made easier work of things on Sunday as they rolled to a 92-74 win.  The Wat’s now 3-1 while Oita is also in the cellar at 0-4.  The Toyama Grouses upended the Tokyo Cinq Reves, 79-70, to run their record to 2-1, the same as Tokyo’s.