Halloween is season for witches, goblins and trick-or-treaters

Halloween:  a time for playing pranks and tricks, conjuring up witches, goblins and haunted houses, and of course, kids looking for candy. 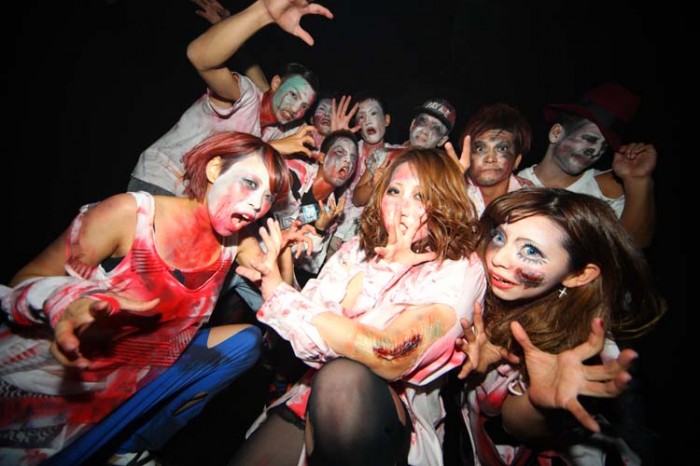 Halloween is the season for ghouls and goblins, with one of the largest contingency of them gathering at Koza Music Town Pumpkin Panic event on Saturday for some fun times.

But really!  Where’d this come from?  What, exactly, is Halloween?  Ask a dozen people and you’re likely to get a dozen different answers, because it is to different folks exactly what they’ve been taught through the ages.  Let’s see if we can fill in the blanks and dispel myths and wrong notions about what Halloween is, and isn’t. 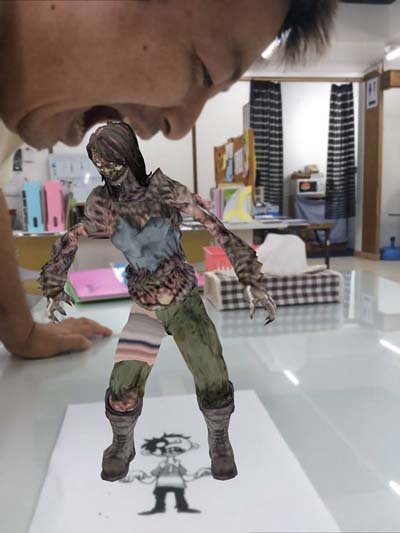 To eat or be eaten… Zombie or not.

Halloween dates back to about 1745, originating in Scotland as a Christian event or origin.  Halloween means hallowed evening, or holy evening, from the Scottish for All Hallows’ Eve.  It’s traditionally celebrated around the world on Oct. 31st, the eve of the western Christian feast of All Hallows’ Day.

Through the ages, Halloween has evolved into many participatory activities beginning with the church services and lighting candles on graves of the dead to pay homage, and on to dozens of more exciting things like guising, or trick or treating, dressing up in costumes for parties, finding creative ways to transform pumpkins into works of art, designing and going to haunted houses, playing tricks on people, and of course, gathering copious amounts of candy.

Those customs began in Celtic countries, many from pagan origins that have been talked and passed on to people around the world.  Ireland claims credit, as does Scotland, but then again, so do the Romans.  All agree that prayers for the harvest are and were an integral reason for the festivals and prayers.  The rituals included bonfires believed to have mystical powers in the smoke and ashes to protect and scare away the darkness of the impending winters.

Mumming, or guising, is the precursor to today’s trick-or-treating.  They were the practices dating back to the 16th century where people in costumes or disguises went house-to-house uttering songs or reciting verses in exchange for food.  Youths picked up on the concept, adding the threats of pranks if their demands weren’t met. 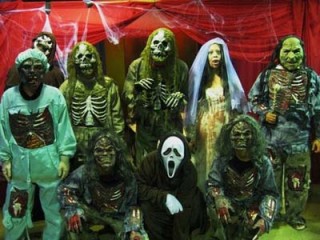 Goblins have been around for a long time.

We noted All Hallows Eve as being Halloween, taken from All Hallows’ Day on November 1st.  It was for centuries a major Christian day, ranking alongside Christmas, Easter and Pentecost.  It’s not new; All Hallows’ Day’s been around since at least 609 that we know of.  Through the years, praying for the dead was a primary part of the day’s activities, with many people dressing up and burning candles to guide the dead back to visit early homes.  That happens today in Europe and other parts of the world, including Obon here in Okinawa.

The New York Halloween Parade was instituted in 1974, spreading the popularity of the day through the media, 60,000 participants and two million in-person spectators and a worldwide television audience of more than 100 million.  From there, the commercial aspects of making a buck off Halloween began in earnest.  Popular were the witches, headstones, ghosts and skeletons, as well as intriguingly designed, scary haunted houses to set visitors hearts palpitating. 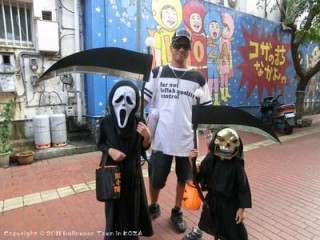 Halloween enthusiasts have a love affair going with the pumpkin, although he original veggie for carving in Ireland and Scotland was the turnip.  In North America, the pumpkin was deemed easier to carve, and thus more fun, and from 1837 has been a large part of the celebration.  Scarecrows, cornhusks and other autumn symbols have cropped up, with black and orange somehow becoming the traditional Halloween colors.

It’s the trick or treating that’s the most fun for the largest number of kids and even older than kids ‘kids’.  Spawned from the guising, or souling, trick or treating has gone from the practice of going from parish to parish of the protestant and Catholic churches begging for cakes from the rich in exchange for offering up prayers, to going in search of fun and candies.  For tens of thousands of kids, nothing beats going door-to-door in search of treats.  For yet others, a more current variation of trick-or-treating is trunk-or-treating, where the Halloween candies are doled out from the trunks of cars in church parking lots or school parking lots. The traditions are there, but for many, so is safety in having adults nearby.

The Halloween costumes are everything from ghosts and gremlins to vampires and devils.  The costume industry has become a mega-millions industry, and kids without costumes are somehow feeling left out.  They’ll wear the costumes, go to the parties, bob for apples and play games, and carry on the traditions.  The Candy apples got their start in Gret Britain and Ireland, but are now common in North America, as are candy corn and candy pumpkins.  Caramel apples and caramel corn are popular in many parts of the world.  Gaining popularity in many countries are pumpkin, pumpkin pies and pumpkin bread.

The religious aspects of Halloween today are mixed.  Many Protestant Christians celebrate All Hallows’ Eve as Reformation Day, while other Christian organizations such as the American Tract Society use the occasion to distribute gospel tracts.  There are some, however, that frown upon Halloween. Jews and Muslims, as well as many protestant denominations, have taken their own stances.