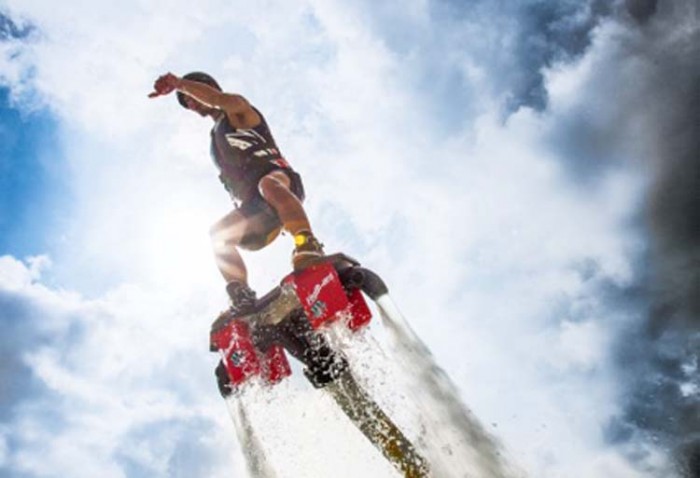 Japan Flyboarding Championships take place in Nishihara, Sunday, where those who have mastered the the newest water sport try to outdo each other and awe the spectators.

It’s a sport unlike any other, crossing watercraft activity with the participant strapping into a pair of boots and then being propelled skyward over the open waters.

Tricks like this back flip earn points in the Japan Flyboard Championships competition on Sunday at Nishihara Marine Park where the top three will earn a trip to the world championships in Dubai in December.

It’s flyboarding, and the All Japan Flyboard Blue Seal Cup championships are coming up Sunday at Nishihara Marine Park in Nishihara town Map: http://goo.gl/maps/VtirV .  Sponsored by Blue Seal, the Okinawan ice cream company, the tournament will decide who the number one flyboarder in Japan is.  The Japan Cup starts at 8:30 a.m. and continues all day through 4 p.m.. Details on flyboarding and the tournament are available on the competition website http://www.flyboard-japancup2014.com/

The rules are simple, really, as each player shows his or her own original technique of flyboarding within the allowed time.  Judges award points for the action, and the highest points scorer wins and becomes the No.1 Flyboarder in Japan. The top three players in the tournament will join the Flyboard World Cup in Dubai on Dec. 20th, where the world’s best compete for the Number One Flyboarder in the World title.