For newcomers to Okinawa – and for those who’ve procrastinated through the years – there’s still a chance to be part of a Guinness Book of World Records record! 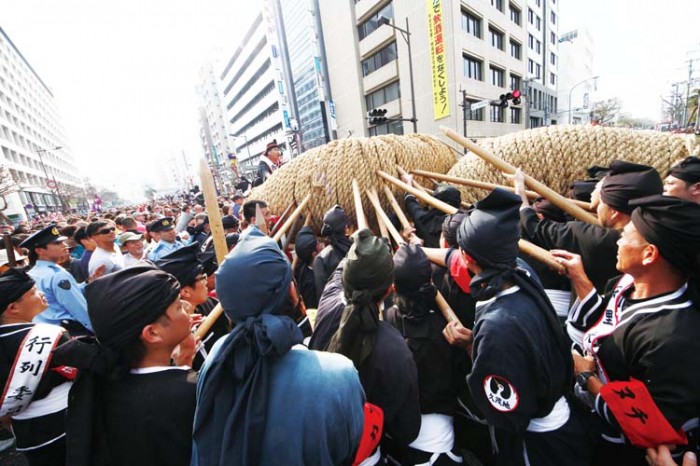 The Giant Tug-of-War starts with joining the two halves of the rope that in itself is quite an undertaking considering the size of the rope.

The Naha Matsuri, including the 44th Naha Giant Tug-of-War last weekend was cancelled because of typhoon Vongfong, but the headline event, the world’s largest tug-of-war, all properly documented by the Guinness Book of World Records, will be conducted this Sunday aftenoon.. What’s more, participants can help keep the historical event alive and Okinawa on top when the 30-minute rope pull takes place. 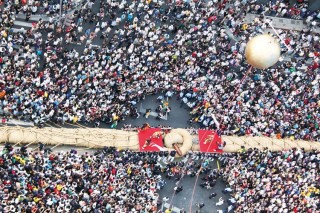 The Giant Naha Rug-of-War gathers the largest crowd of any festival on Okinawa, and although Sunday”s event is a substitute for the original festival that had to be cancelled because of typhoon Vongfong, a considereble crowd is still expected to attend.

Tens of thousands will join hands trying to move the 45-ton in an event that first made its way into the Guinness Book of World Records in 1997.  The rules are simple; an estimated 20,000 men, women, boys and girls will team up with either the east or west side to shift the behemoth five meters during a half-hour competition.  Participation is open to everyone, but those desiring to wrap their hands around the ropes must get there well in advance of the ceremonies.

Spectators and particpants will gather on Route 58 at Kumoji Crossing in downtown Naha for the tug-of-war, which ceremonially begins Sunday at 2:45 p.m. when representatives of seven teams from east, and seven from the west, perform a series of martial arts demonstrations.  After speeches and praise for the 14 tug-of-war teams making up the two sides, the fun begins.  The two lengths of rope, each measuring some 300 feet long, are pulled together and coupled with a 10-foot wooden peg.

Kings symbolizing the supremacy of two dynasties in Naha centuries ago approach each other atop the rope with their royal courts, issue challenges to one another, and then command the tug-of-war begin.   Team leaders clamor aboard the nearly two-meter wide rope and begin mustering their supporters into place. Hundreds of pulling ropes are separated from the main rope, and all hands grab on, waiting for the signal.  Once given, the pulling begins to cries of ‘Yoishoi, Wasshoi’ and ‘Hah-ee-yah’, meaning heave ho, or pull harder.  The battle lines are formed, with east and west each trying to move the rope five meters within 30 minutes.

The tug-of-war dates back to 1600, when it served a dual purpose.  Villagers from east and west did honorific battle for victory as a sign to shamans who predicted the future.  The prayers were for a good rice harvest.  The second motive was to instill peace and stability into the lives of seafarers of this island nation, and to insure their safety.  The tug-of-war rivets spectators during the hour-plus event, after which knives come out for everyone to cut ceremonial pieces of the rope to take home.  Modern day festivities began in 1935, then died out for a few years, only to be resurrected in 1969. Thousands flock to the street to be a part of Okinawa’s largest rope event.  There are others across the island, but none compares to the Naha event.  Dozens of small ropes extend from the main rope, which has been constructed over the past several months at Naha Military Port.

The Tsunahiki ceremonies leading up to the tug-of-war begin at Kumoji intersection at 2:45 p.m.  It’s crowded, so you’ll want to get there early to get a good position.  There are martial arts demonstrations, music, and of course the queuing for the tug-of-war itself. The ceremonial release of thousands of balloons and confetti high above the gathered crowds signal the start of the battle for rope pull bragging rights at 4 p.m.

The Tsunahiki on Highway 58 is free.  Parking in the area is not, and can wind up costing several hundred yen, depending on how long you linger in the festival area.  Tour and bus services are offered by Marine Corps Community Services, including the Single Marine Program, 18th Force Support Sq. at Kadena Air Base, and Navy MWR.

The costs for foods and souvenirs vary, depending on individual tastes.  Of course, the pleas of little ones appealing for more stuff must also be factored in.

Head south to Naha City on Highway 58.  As you pass Tomari Port and Tomarin Hotel on the right, first opportunities to find parking are offered.  Turn left or right off Highway 58 and look for the blue “P” signs.  The alternative is to continue through the City, crossing the bridge adjacent to Naha Military Port, and then look for the parking signs.  For those planning to make a day of it, the more southerly parking is recommended; when tired, the shorter walk back to the car will seem wonderful.