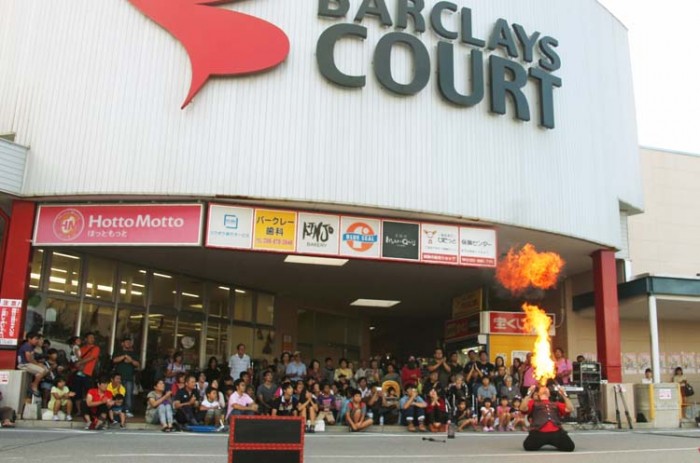 The Street Performance Festival’s main venue is the Barclay”s Court shopping center in Urasoe nest the the US. consulate.

More than a dozen performers and groups will take to stages at five locations across Urasoe City this weekend, staging the 3rd Street Performance Festival designed to focus on promoting the city. 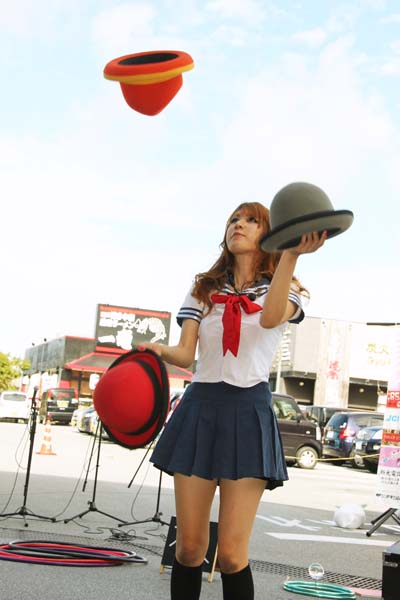 Most of the performers are amateurs like this young female juggler with her hat trick.

The Street Performance Festival will be held at the main site, Barclay’s Court shopping center in Tohyama, next to the U.S. Consulate, and at San-A Kyozuka City, Makeman, Home Center Sakumoto and Urasoe Shopping Center, on Sunday.  Street performers will pump up the sites.  Juggling, clowns, magic, dance, and a fire performance are all ready to stage a variety of performances to entertain people.

As a special guest, the China Great Yellow River Acrobat Team, which appears on television, will perform. Each performer is skilled and knows how to make people happy.  There’s not often a chance to see such an event on Okinawa.

At Barclay’s Court, opening ceremonies are at 11 a.m. with Chanpuru entertainer Tamanchu at 11:30 a.m. Yuuri performs at 1 p.m., the Hit Parades at 2 p.m., street performer Tsubasa at 3 p.m. and the China Great Yellow River Acrobat Team at 4 p.m.  Closing ceremonies are at 6 p.m.  Performances at the other locations –San-A Kyozuka City, Makeman, Home Center Sakumoto and Urasoe Shopping Center will run 1 p.m. ~ 4 p.m.