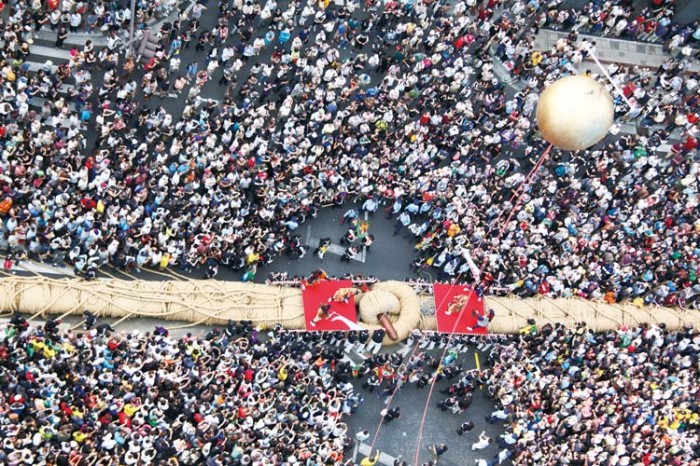 The Sunday’s Giant Tug-of-War in Naha has been postponed to next Sunday because of typhoon Vongfong.

Supertyphoon Vongfong barreling towards Okinawa and on course to Japan has prompted over this weekend has forced organizers to cancel or postpone most of the scheduled events. 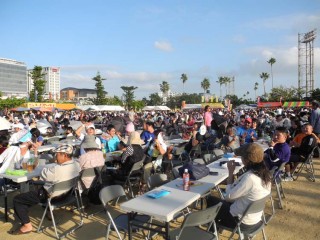 Naha Festival does not happen this year.

According to meteorologists the typhoon that is expected to start affecting Okinawa Saturday morning is about the same strength as typhoon Haiyan that ravaged the Philippines last year killing nearly 8,000 people and causing widespread destruction.

Although the typhoon is expected to slowly lose steam, it still packs sustained winds of estimated 150 mph or 67 m/s, and, although possibly not making a direct hit on the island, still passing uncomfortably close.

Only a week ago Okinawa was affected by typhoon Phanfone that also narrowly missed the island, but still 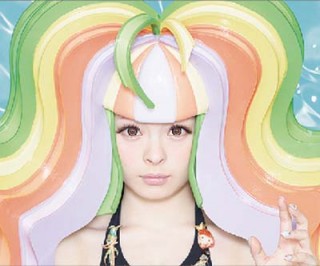 caused the deaths of four people, three of the American servicemen and one a local woman, who were swept out to the sea by high waves caused by the typhoon. Officials say that Vongfong is likely to cause dangerously high surf along Okinawa’s coastlines and urge people to be extremely cautious if they have to venture close to the shores.

Vongfong has already prompted event organizers to cancel almost all of the planned weekend events on Okinawa. The weekend’s main event, the three-day Naha Festival that was scheduled to run from Saturday through Monday was cancelled altogether, except its main event, the Giant Naha Tug-of-War was postponed by a week to Oct. 19. On that day the tug-of-war will take place at its planned venue on Highway 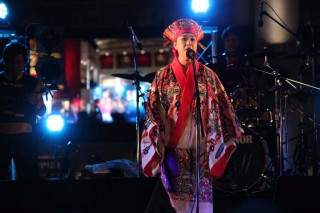 The three-day Torii Beach Rocktoberfest 2014 was cancelled for the second year in a row. So was the musical “Footloose” that was scheduled at Okinawa Convention Center for Sunday, and a performance by Swiss jazz violinist Thomas Preisig at Garaman Hall in Ginoza Culture Center has also been canceled.

Other canceled events include the first Asobeach event that was scheduled for Naminoue Umisora Park in Naha for Friday, Saturday and Sunday, Yambaru Industial Fair in Nago

Okinawan music event Niutu Umachii, was postponed all the way to Mar. 3, 2015.