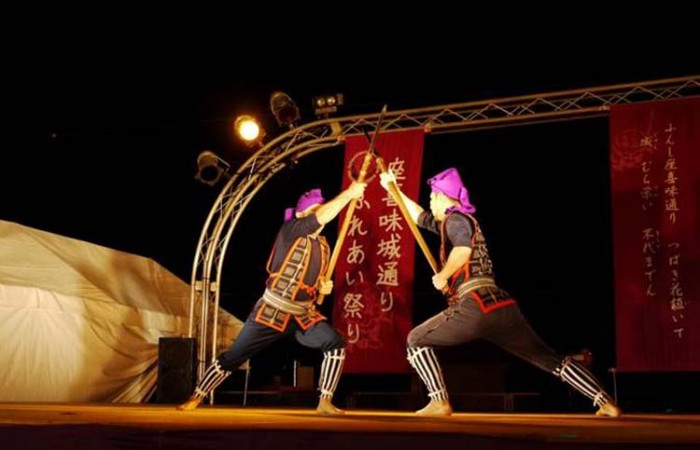 Yomitan, and especially Zakimi district’s specialty is Bojutsu that the local people have practiced for generations and take great pride of. 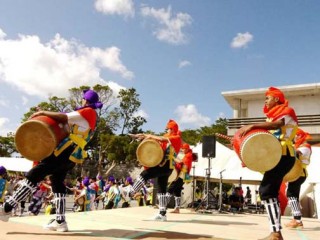 On the street at this free festival, people can enjoy a wide variety of stalls from all over Yomitan Village, which include food stalls, sundries store and an aroma massage store. Local people from the Zakimi district stage this festival, and the Zakimi Residents’ Association is organizing the key parts of it cooperating with a various local groups like the women’s society and kids’ groups to boost the festival’s local image, and bring local people closer to each other.  The festival runs from noon to 7 p.m.

In Yomitan Village, every district has had its original Bojutsu, a Japanese traditional martial art that uses a long stick as a weapon, since around 15thcentury in 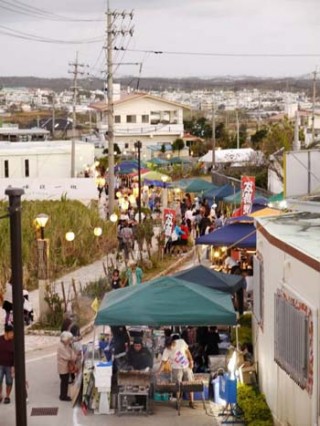 The festival venue is the road leading to Zakimi Castle Ruins Park.

the Ryukyu Kingdom era, the skills of which have been handed down from generation to generation.  In particular, Zakimi Bojutsu is more unique than other Bojutsu in the village, which are more actual and practical. Nowadays, Zakimi Bojutsu is performed as a traditional art. In this festival, kids group is also scheduled to perform Bojutsu.  Activities all take place in the open space of Zakimi Gusuku Dori leading to the Zakimi Castle Ruins.

One of the main stages is a pantomime show by Makoto Inoue, who used to be a movie and stage actor. However, he became more interested in playing silent performances.   Other than that, an Eisa show of preschool children, Hawaiian Hula, and traditional Shishimai or Lion Dance performance take place.   At the end of the festival, two local youth chambers will stage an Eisa performance.

Parking is in short supply, and visitors must use the parking space next to the sub ground of Yomitan Village Athletic Space.  A free shuttle bus will run between the parking area and the event site.

Opening performances of Kids Eisa, Hawaiian Hula and a street dance show begin at noon.  International pantomime artist Makoko Inoue is on stage at 2:10 p.m., live music starts at 2:30 p.m., and a charity auction benefiting the Great East Japan Earthquake at 4 p.m.  The Tokeshi Youth Chamber Eisa and Zakimi Youth Chamber Eisa are on stage at 6:15 p.m., ahead of the 7 p.m. finale.