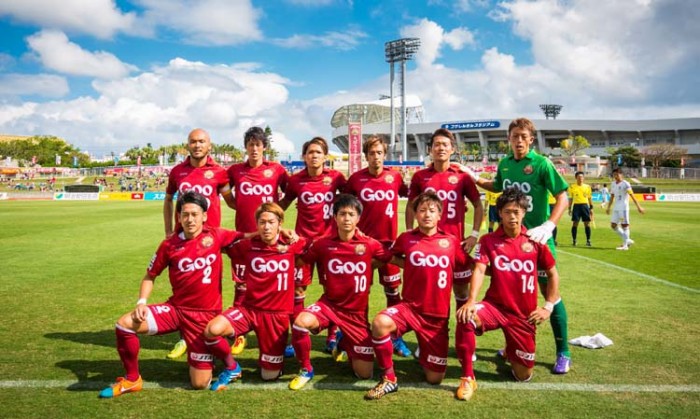 FC Ryukyu, the only professional soccer team in Okinawa, is playing its first season in the 3rd division of Japan’s J-league. 提供：FC琉球

The match that was part of the FC Ryukyu’s annual 10,000 Soccer Festival saw RC Ryukyu charging hard from the beginning, and during first half at 14-minute mark their effort produces results. A header by Satoshi Nakayama from a corner kick sank into J-22 team’s goal, and FC Ryukyu led the game 1-0.. Nakayama followed at the 38-minute-mark with another goal bringing FC Ryukyu to 2-0 lead after the fist half.

In the second half, J-22 mounted a strong counterattack and scored its fist goal at 65-minute-mark with a shot from midfield by Tasuku Hiraoka. Noritaka Fujisawa scored for FC Ryukyu soon after, also from midfield. Tatsuya Wada of J-22 managed to narrow the numbers to 3-2, but Shota Aoki then nailed the final score to 4-2 with a penalty kick securing FC Ryukyu its first win in seven games.

After the game, FC Ryukyu Head Coach Norihiro Satsukawa said that he appreciates most of this game that his team was able to win. “We organized this 10,000 Soccer Festival with the help of many sponsors and supporters, but have not been able to win until today. We finally were able to put a stop to our long losing streak with this win at our 10,000 Soccer Festival today. This is a very happy day for us, indeed. We must thrive to push up our skill more in order to increase the level of soccer in Okinawa. When we win it’s more fun and earns us more cheers from our fans. We do our best to keep this up in the future,” Satsukawa said after the game.

FC Ryukyu, will be finish their 2014 season with the home game on Sunday, Nov. 16th, at Koza Sports Park. The 2014 Meiji Yasuda Seimei J3 League (3rd Division of J-League) runs from March to November.

The club is training hard hoping to finish its inaugural J3 League season with a win on their home turf. It’s not going to be easy as the team faces Zweigen Kanazawa, the current first place team in the division!