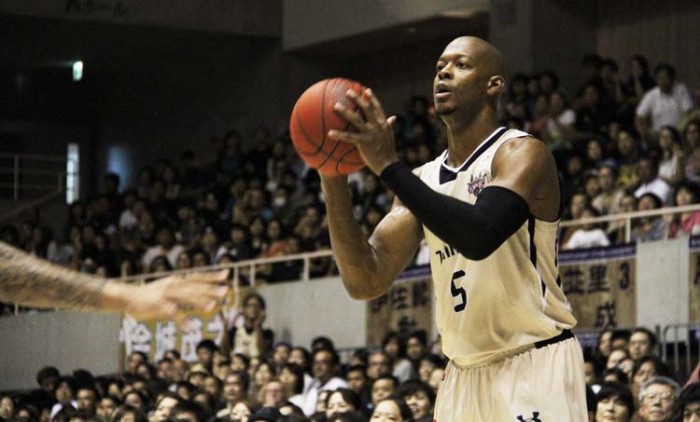 Perpetually reliable Anthony McHenry put in a hard day’s work on both Saturday and Sunday scoring 15 and 12 points respectively.

It was a road series reminiscent of last spring’s Basketball Japan League championship, as the Golden Kings took on the Akita Northern Happinets, and the outcome was pleasantly the same as Okinawa swept the series.

The Ryukyu Golden Kings first chalked up an easy 79-66 win, with Narito Namizato tallying a team high 19 points while Anthony McHenry added 15 plus 13 rebounds and five assists.  Draelon Burns added 14, Kibwe Trim contributed 11 points and a dozen rebounds, while Naoto Kosuge was hot with three 3-pointers.  “We felt tense in front of the Akita fans,” said Okinawa head coach Tsutomu Isa.  “We were able to play the game we prepared, and think tomorrow will be easy, too.” 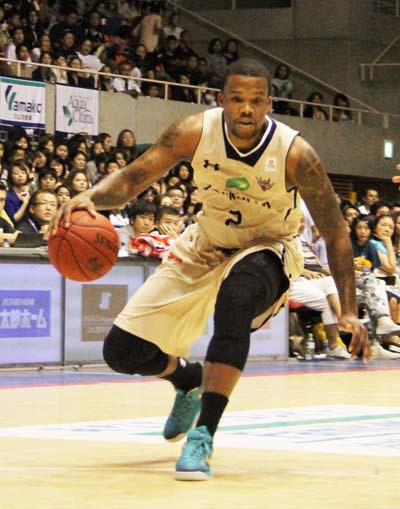 Draelon burns logged 14 points on Sat. and 27 more plus 11 rebounds on Sunday.

It was, as Okinawa clicked off a four-point win against the Northern Happinets on Sunday, running their Western Conference leadership numbers to 12-1 with a 79-75 win.  Akita is nip-and-tuck on the Kings’ tail with a 12-4 record.  Kings Coach Isa was pleased with “playing in front of numbers of our boosters for two days, and although we emboldened Akita’s offense, we played our game without hassles.”  Makoto Hasegawa, the Northern Happinets bench leader lamented “we could not modify mistakes and the bad mood from Saturday, as we realized the Kings’ strength but made mistakes in key situations.”

Draelon Burns led the Golden Kings in the second outing with 27 points and 11 rebounds, while his teammates held Akita’s star, Richard Roby, to a lowly seven points.  For Okinawa, it was a sixth straight victory, supported by Anthony McHenry’s dozen points and a six-pack apiece for Ryuichi Kishimoto and Narito Namizato.

Elsewhere in the bj-league, the Iwate Big Bulls extended their win streak to 14 with resounding victories over the Yokohama B-Corsairs. For the record, Iwate’s head coach is Dai Oketani, a former Ryukyu Golden Kings head coach a few years ago.  Last weekend he first slammed the B-Corsairs 100-55, then followed up with a 92-78 rout.  The Big Bulls have the best record in the league at 15-1, while the B-Corsairs now rest at 4-12.

On the flip side, the Saitama Broncos rolled to an 11th straight defeat, the league’s only team without a number in the win-column. The beating came at the hands of the Hamamatsu Higashimikawa Phoenix, who punished Saitama 91-81 and 88-50.  The Phoenix are now 11-3, including a healthy 5-1 on the road, while the Broncos, the only one of 22 teams in the league, in the cellar at 0-12.  The Kyoto Hannaryz picked up a pair of wins, snapping a five-game Niigata Albirex BB winning streak.  Kyoto won 81-71 and 74-58 to push their position atop the conference to 14-2.  The Albirex slip to 8-8.

The Toyama Grouses also cruised to a series sweep over the Shimane Susanoo Magic, taking the first 78-68 and the Sunday finale 71-62.  The Grouses are now near the top of the leader board with a 12-4 record, while the Susanoo Magic hover near the cellar’s bottom step at 1-15.  The Aomori Wat’s battled to a series split against Fukuoka Rizing, winning the opener 83-78, only to fall in the Sunday afternoon contest 77-59.  The Wat’s in the middle of the pack at 9-7, while Fukuoka is 4-12.  The Sendai 80ers split a squeaky tight series with the Oita HeatDevils, eeking out an 85-82 victory in the opener.  It took overtime for the 89ers to bounce back 91-86 for the Sunday win to boost their record to 10-6.  Oita’s now 6-8.

The Osaka Evessa handily whipped up on the Fukushima Firebonds, the league’s newest expansion team, 83-70 and 76-49 to stay almost atop the leaderboard at 11-5. Fukushima is 4-12.  In a matchup of the league wannabes, the Tokyo Cinq Reves split their series with the Gunma Crane Thunders, racking up a 92-75 opening round win on Saturday, only be victims of a Crane Thunders blowout, 87-65, on Sunday.  Tokyo’s 4-12, while the Crane Thunders are even lower at 2-12.

The Shiga Lakestars had little difficulty dispensing with the Takamatsu Five Arrows, killing their four-game win streak.  Shiga took the opener 82-74, and kept the momentum Sunday in Takamatsu, winning 90-77 to move to 10-2.  The Five Arrows are in the middle of the pack at 7-9.  The Shinshu Brave Warriors tallied an easy 97-92 win over the 2-9 Nara Bambitious, but were stunned by a Sunday 98-97 comeback win by the expansion team.  The Brave Warriors are 5-7.