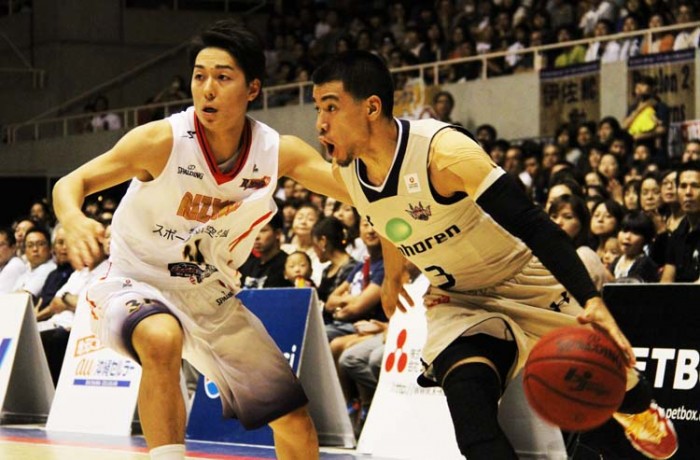 Narito Namizato completed a hard day’s work with six points and six rebounds on Saturday, and then went on to score 11 points on Sunday.

The Ryukyu Golden Kings were in perfect form, keeping the hometown fans on the edges of their seats cheering as they ripped the hapless Rizing Fukuoka twice in Turkish Airlines bj-league play. 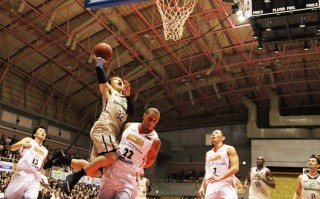 Free throws were the key to Okinawa’s series opening win Saturday, dumping in 25 en route to an 82-70 victory over Fukuoka, who had been seeking a third victory on the year.  It didn’t happen, as Draelon Burns and Ryuichi Kishimoto each tallied 17 points, while teammate Anthony McHenry added 15, plus nine rebounds, to keep the Golden Kings ahead throughout the game.  Morihisa Yamauchi scored eight points on three shots, while Kibwe Trim contributed seven points and nine rebounds.  Hiromasa Omiya also racked up seven points, along with eight rebounds and a pair of steals, while Narito Namizato picked up six points and six rebounds.

Okinawa head coach Tsutomu Isa said his squad was prepared, but noted a more aggressive offense could have led to scoring 90 points or more.  James Duncan, the Fukuoka bench boss, called “the number of rebounds and turnovers” as the reason for his young team’s loss.  Duncan said “our vulnerable aspect is losing concentration when the Kings are leading,” and added “the collapse of our defense is why we lost.” 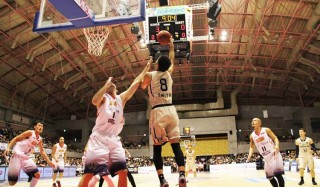 Ryuichi Kishimoto was hot on Sunday, pouring in 17 points, including four from three-point country, as the Golden Kings wrapped the series with an 83-69 victory.  The Kings’ Kibwe Trim and Narito Namizato were atop the scoring with 11 points, while veteran Anthony McHenry contributed nine points, along with seven rebounds and six assists.  First year Kings player Hiromasa Omiya picked up eight as the Golden Kings pushed their record to 8-2.  Fukuoka fell to 2-8 as they lost their third and fourth straight games.  Okinawa’s head coach noted a “sense of relief” on Sunday, pleased that “Namizato and Kishimoto controlled the game and the team, and we played at our pace, with a flow, so I watched with no concern.”

Elsewhere in league action, the Iwate Big Bulls were untouchable, upending the lowly Tokyo Cinq Reves 109-53 and 100-68 to extend their record to 9-1.  Tokyo is 3-7.  The Sendai 89ers fared better, dominating their series with expansion team Fukushima Firebonds.  The 89ers took the opener 95-76 for their sixth win of the season, and then buried the Firebonds 82-55 in the Sunday afternoon contest for a seventh.  The Firebonds are now 1-9.

The Kyodo Hannaryz had little difficulty in manhandling the cellar dwelling Shimane Susanoo Magic, picking up 69-57 and 61-60 victories against the winless hosts.   Kyodo is now 9-1.  The Oita HeatDevils split a series with the Shiga Lakestars, winning 87-78 in the opener, but falling 71-60 in the Sunday game.  The Lakestars improve to 6-2, while the HeatDevils are 3-7.  Meanwhile, the Toyama Grouses swept a series against the Aomori Wat’s, 78-71 and 95-88, to stay atop conference standings with a 9-1 record.  Aomori falls to 6-4.

The Osaka Evessa were happy with a pair of victories against the Takamatsu Five Arrows, improving to 6-4 in the process.  Osaka won 82-68 and 82-73 against the 3-7 Five Arrows.   The Niigata Albirex BB were pleased with their weekend as well, drubbing the 0-8 Gunma Crane Thunders 73-68 and 81-71 to extend their record to 8-2.  The Akita Northern Happinets were happy with the weekend’s action, sweeping a series against the Yokohama B-Corsairs to extend their record to 8-2.  Akita took Saturday’s game by a 20-point margin, 79-59, and nearly matched that Sunday with an 18-point win, 92-74.  Yokohama falls to 3-7.