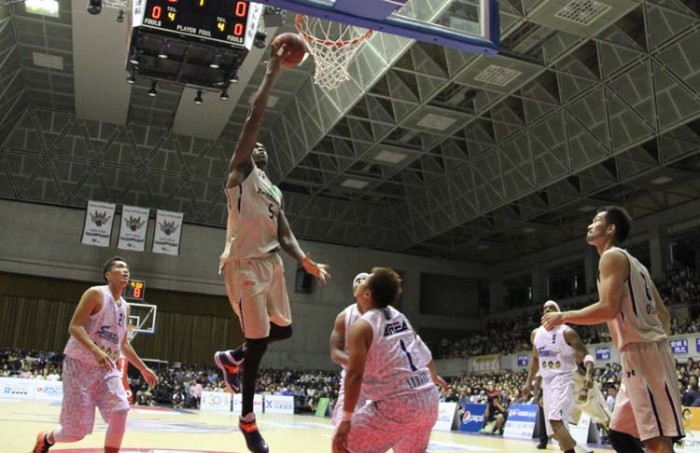 Kibwe Trim was the hero in Ishigaki picking up 12 points on Monday and boosting the Kings’ score up by 16 points on Tuesday.

The first game of the series wasn’t much more than a scrimmage for the Ryukyu Golden Kings, but was exciting the basketball fans in Ishigaki, on the far southern end of the prefecture, as the Kings controlled the hardwood and remained in competition for the Basketball Japan League Western Conference lead.

Playing an unusual series on a Monday and Tuesday, the Golden Kings whipped up on the Gunma Crane Thunders, pushing their cellar-dwelling record to a lowly 1-11 with wins of 88-65 but contending with a much narrower victory 74-71 on Tuesday. Draelon Burns topped the Okinawa squad with 13 points in the series opener, while Kibwe Trim picked up a dozen as they were never threatened, leading 41-24 at the midway point.  The victories propelled the Golden Kings to a 10-2 overall record.

Okinawa’s locked in a fierce battle for control of the Western Conference, one of three teams who have winning records with only a pair of losses.  The Hamamatsu Higashimikawa Phoenix were in the elite club, before losing to the Kyoto Hannaryz now with the best record, 12-2.  The Shiga Lakestars are 7-2.

The Phoenix were strong in the series opener, outlasting the Hannaryz 76-65, but Kyoto bounced back Sunday to extract a 76-73 victory.  The Iwate Big Bulls, meanwhile, rolled to an easy pair of wins against the Shimane Susanoo Magic, 99-76 and 71-63, to extend their Eastern Conference lead at 13-1.  The Susanoo Magic are at the bottom of the ratings, along with the Gunma Crane Thunders, at 1-3.

The Shiga Lakestars were on fire, too, as they pounded the Niigata Albirex BB 67-60 and 75-69 to extend their season to 8-2.  Niigata dropped to 8-6.  The Akita Northern Happinets had little difficulty handling the Nara Bambitious, first grabbing a 108-92 win, then sealing the series with a 98-87 victory.   Akita is now 12-2 in the east, while Nara drops to 2-8.  The expansion team at Fukushima, the Firebonds, had little trouble dealing with the 3-11 Tokyo Cinq Reves, holding on to win 74-59 in their opener, and making an even easier Sunday of it, winning 87-56.  The Firebonds are 4-10, while Tokyo is 3-11.

The Takamatsu Five Arrows made it 1-for-2 last weekend against the Shinshu Brave Warriors, sweeping the series 71-70 and 82-73.  Takamatsu is now even at 7-7, while the Brave Warriors are 4-6.  Yokohama B-Corsairs were in high gear against the Fukuoka Rizing, winning the series opener 83-77.  Ranked somewhat above Fukuoka, the  B-Corsairs still couldn’t muster enough to control the series, losing Sunday 100-86.  Fukuoka is now 3-11 while Yokohama is 4-10.