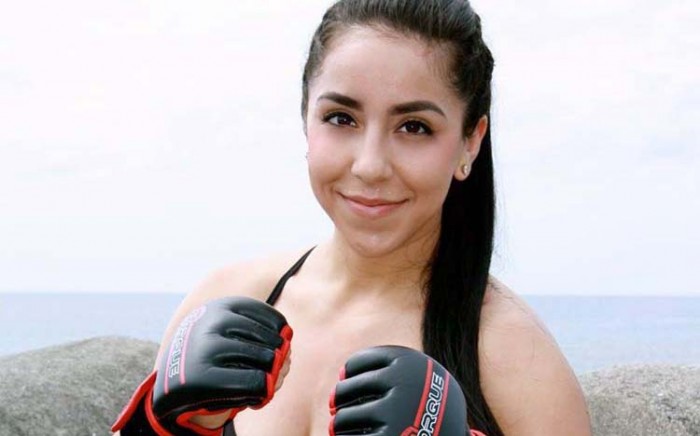 Peggy Ross is working hard towards her goal of becoming a professional on the U.S. MMA circuit once she leaves Okinawa.

Peggy Ross loves martial arts, making time in a busy schedule as a military wife and mom to train and fight over the past three years while keeping her eye on the goal of ultimately becoming a professional on the U.S. Mixed Martial Arts fighting circuit. 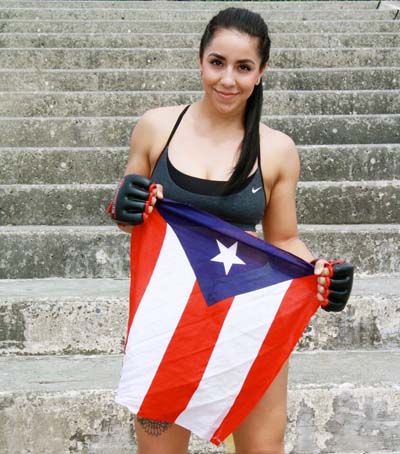 Peggy has her roots in Puerto Rico and is proud of it.

Before coming to Okinawa with her husband, 7-year-old daughter and 5-year-old son, Ross practiced boxing, but then switched to Brazilian Vale Tudo-style fighting after trying several different martial arts.  She enjoys it, she says, because it gives her a chance to use every fighting skill she’s acquired. During her week, she follows a brutal regime of practicing six days a week, a session twice a day. “That’s a tough regime,” she admits, but one that suits her. Her husband, who’s a practitioner of Brazilian Jujutsu fully supports her. So do her children, who also practice martial arts. In addition to Ross’ already hectic schedule, she still finds time to teach twice a week at Camp Foster Gym.

It took place at Delfin Arena in Naha for the first time, and has been held three times a year, attracting more than 800 people to every event.  It has become the only event for amateur mixed martial arts. Locked On is the only accredited event by The OUTSIDER as a player development competition. There are many kinds of people –including students, business people, civil servants, military personnel and others–  who have participated in Locked On contests.  More than 400 people in Okinawa have competed in the fights.

What is ‘Locked On’?

Many fighters who were successfully taking part in Locked On have achieved fine performances in The OUTSIDER.  On December 8th 2013, 32-year-old Shinya Kumazawa from Urasoe City, a member of Toushin Gym, upended the former champion, RYO from Kanagawa, by heel hook 1 minute 56 seconds into the first round by a referee stop, and won the title of 65-70kg champion in the 28th OUTSIDER event in Osaka at the Namihaya Dome.   In yet another tournament, the 31st OUTSIDER at Differ Ariake in Tokyo that took place on June 22nd, Takashi Miyagi fought in the newly created ’55-60kg class tournament’.  That’s the reason Akira Maeda from the Outsider, and mixed martial arts fans, expect Okinawa fighters to do well, and call Okinawa the “Kingdom of Fighters.”

What is The OUTSIDER?

The OUTSIDER is a mixed martial art that Akira Maeda produced for amateur and semiprofessional fighters.

‘Tenkaichi Budokai’ that took place in Kita-Kyushu City, in Fukuoka Prefecture, inspired Maeda.  Maeda was impressed by the passionate fighting of the participants. By modeling on ‘Tenkaichi Budokai’, he started to accept amateur fighters he called ‘outsiders’ from all over Japan under the concept of fights of outsiders and no professionals.  In his endeavor he used a catch-phrase ‘Wake up outsiders!’

Since the first tournament in March 30th, 2008, an Outsider Tournament has been held 30 times.  The OUTSIDER tournaments have developed into contests with top fighters from foreign countries and a professional association in addition to continuing to organize weight class tournaments for amateurs.  The OUTSIDER has produced a number of fighters who have gone professional as fighters in the affiliated RINGS’ fights that Maeda restarted in 2012.

The next Locked On Tournament takes place at Namura Hall in December 14 for male fighters only. The tournament highlight is the Okinawa Championship finals for fighters in 60~65 kg weight class.