The island’s prestigious Tour de Okinawa is set to run this weekend with more than 4,000 cyclists competing in and around the northern Okinawa city of Nago and surrounding areas. 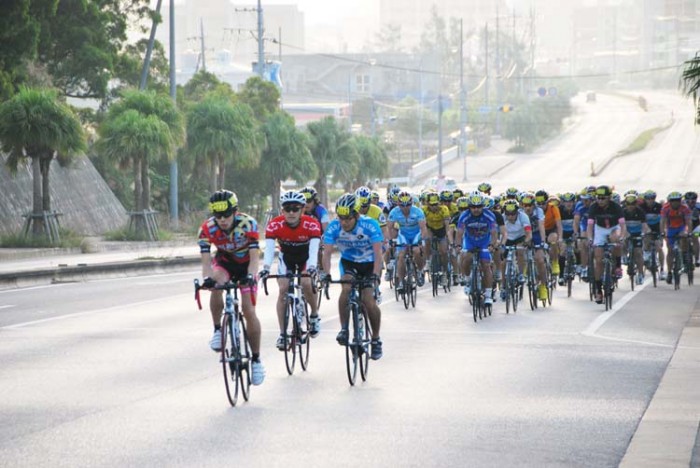 Nago’s Tour de Okinawa has grown into the largest bicycling event in Japan with over 4,000 cyclists participating in its two dozen races.

International Road race event officials have invited the top racers not only from Japan, but overseas, for the two days of events Saturday and Sunday.  The events are designed to improve competition power among racers from across Asia.  Some two dozen races, including more than a dozen elements of racing, eight cycling section events, and another couple festival related events are promoting this, the biggest cycle sporting event in Japan.  There are international road races, citizen road races and citizen tour races. 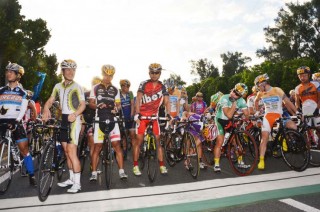 The citizen cycle sport event begins with Japan’s top road race, and citizen races of 210km, 140km and 50km.  The events promote spreading cycle sports and improving competition power of amateur racers.   This 26th annual Tour de Okinawa 2014 is free for spectators, starting at 7 a.m. Saturday when races begin.  At 8 a.m. there will be a unicycle event, all leading up to the formal opening ceremonies Saturday afternoon at 4 p.m.

There are various courses such as the long distance cycling for experienced racers and family participatory course such as the 70km Onna Village family cycling in order to promote parent-child bonding and sound nurturing through the experience of the local culture and life in Yanbaru. In addition, in order to create more chances for communication with disabled athletes, ‘Barrier-free cycling’ will take place.  There are also unicycle and three-wheeled cycle events for children.

Sunday’s race action gets under way at 6:45 with the Champion Road Race, followed with an 8:30 a.m. start for the International Junior Road Race covering 140km.  The 10km Kids Road Race begins at 9 a.m. and the 100km International Women’s Road Race rolls into action at 9:30 a.m.  The Awards Ceremony takes place at 3 p.m., followed by closing ceremonies and a friendship party at 4 p.m.

The first races were held in the first year of the current Emperor’s reign, that Japan calls “Heisei, 1” and this is the 24th year of Tour de Okinawa. The event is held for the purpose of promoting the sightseeing in a northern Okinawa areas, culture, and contributing to improvement of public benefits, such as a community improvement or health enhancement.

The two-day event is also used to spread news and promotion of the cycling sport in Okinawa Prefecture, and international exchange and cooperation. Organizers have gained cooperation of various organizations of Okinawa Prefecture and also the whole country. The races begin at 8:20 a.m. both Saturday and Sunday.