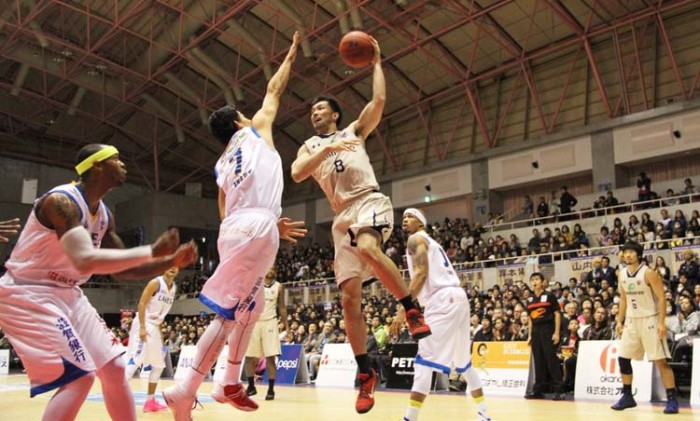 Despite having trounced the Lakestars 80-62 Saturday, the Kings failed to deliver a victory on Sunday losing 74-71.

The Shiga Lakestars came to Okinawa, surprising the Ryukyu Golden Kings by stealing away one of the year-ending victories the home fans had been expecting. 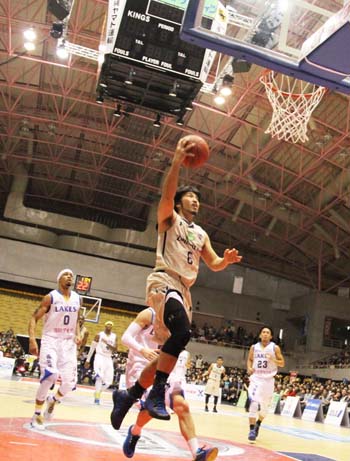 Okinawa did well enough in the series opener, spanking the Lakestars 80-67 in Okinawa City, behind the power shooting of Draelon Burns’ 21 points, and support from Anthony McHenry with 13, Anthony Kent with 11 plus nine rebounds, and Kibwe Trim’s ten points and ten rebounds.  “We were really relieved to win the game,” said Kings head coach Tsutomu Isa.  “We had talked of concentrating in order to win the last two games of the year on our home ground.”

That grand plan didn’t materialize, as the Shiga squad wasn’t giving an inch Sunday, carrying a 48-42 lead into the halftime break.  Lakestars head coach Kohto Toyama called it “a tough game” but said he was “relieved to cut off the negative mood of three consecutive losses.”  The Lakestars downed Okinawa 74-71, extending its record to 12-6, while the Golden Kings are now 18-4.

“We really wanted to conclude this year with a win,” said Okinawa’s head coach, “but we keenly understood we could not win if we made mistakes of offense and defense.”  Isa says now the team objective is “to get out of this situation and face the next game. Draelon Burns again led the Golden Kings’ scoring with 18 points, followed by Anthony Kent with 14 and Anthony McHenry with 10.  Morihisa Yamauchi garnered eight points.

The Sendai 89ers, meanwhile, took an 89-82 victory from the lowly Gunma Crane Thunders Saturday, only to find the tables turned less than 24 hours later.  The Crane Thunders improved to 6-16 with a 93-88 win in Sendai.  The 89ers are now 17-17.  The Toyama Grouses pummeled their rivals twice over the weekend, handing the Iwate Big Bulls 77-73 and 74-66.  For Iwate, it was a double blow; after reeling off 19 straight wins, the Big Bulls have now lost three in a row, dipping their record to 20-4.  The Grouses are 17-7.

Fukuoka Rizing put on an impressive show Saturday, drubbing the winless Saitama Broncos 102-91.  The Rizing did it again Sunday, but the Broncos applied pressure in Fukuoka’s 77-74 win.  Fukuoka is now6-16, compared with the 0-20 Broncos.  Hamamatsu’s Phoenix swept their series with the Fukushima Firebonds to extend their season record in the Western Conference to 19-3, a notch ahead of the Ryukyu Golden Kings.  The Phoenix took 78-67 and 77-53 wins from the 7-17 expansion team.  The Osaka Evessa outdistanced the Oita HeatDevils 82-77 in their series opener at Oita, but couldn’t hold on to a lead Sunday, falling 87-85.  Osaka’s now 15-9, while the HeatDevils are 7-15.

The Kyoto Hannaryz had an easy weekend, pounding the Nara Bambitious 81-62 and 70-64, to run the Western Conference leader’s record to 21-3.  Nara, another of the league’s expansion teams, is now 7-13.  The Shimane Susanoo Magic also rolled to easy wins, upending the Takamatsu Five Arrows  90-82 in the opener, and then coasting to a 108-78 win on Sunday.  The two non-contenders are in the middle of the pack, with Takamatsu at 7-17, while the Susanoo Magic are 6-18.