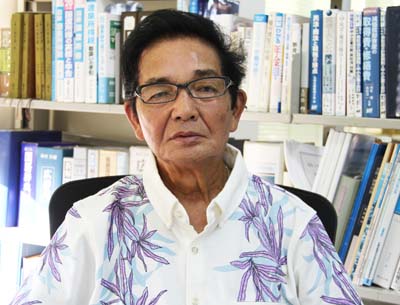 Gentetsu Shiroma has been in tax and accounting business for 40 years.

Foreigners working in Japan, or conducting personal business while assigned to Japan, often find themselves puzzled on exactly how the tax codes and systems work.

For those with just that touch of business acumen, it can be deciphered from the tax manuals and online publications, but for others, it is simply frustratingly complex.  That’s where Shiroma Gentetsu Tax Office comes in, providing support for a wide range of tax issues and settlement reports individuals and businesses must file with the Japanese government.

Shiroma Tax Office is located just opposite the Ginowan Police Station on Highway 58, and is now celebrating 40 years in business as a time-honored company. The firm has more than 30 employees working, including three fluent in English for those pesky issues foreigners must deal with. Shiroma says “we not only support tax issues or settlement reports, but also give counsel about loans and business management.”  He explains that as a business management consultant, “we are certified as a government-backed organization and could support you by providing expert certified tax accountants or chartered accountants with incubation business support by government.”  Shiroma notes that the support is not only for business owners, but also for people who are planning to start own business in future. 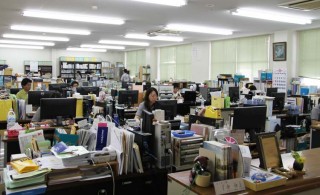 Shiroma Tax Office has a staff of 30 with three of them fluent in English language to serve foreign clients.

Shiroma began his business four decades ago, and his neighbor recommended opening an office in Naha, but he chose Ginowan City because Okinawa had just gone through reversion to Japan a few years earlier, and he thought a lot of Okinawans would take over a business from Americans and would become owners of companies. Shiroma expected that a business in Okinawa would move to central Urasoe or Ginowan City. After he opened the office in Ginowan, he looked for new clients by himself, but says it was a very hard way to do business because nobody was in the area.  Day by day the number of his clients grew, and now he 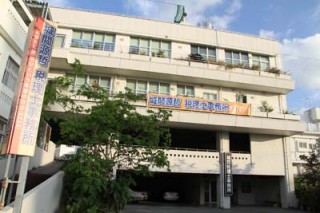 Shiroma Tax Office is located just across the street from Ginowan Police Station.

has customers all over the Okinawa from north through south and also from Izena and Miyako islands.

Shiroma is also active in the community, warming to volunteer activities. He visits end-of-life care facilities every Thursday and delivers and arranges flowers because he wants patients to “feel some joy and relax in hospital life at least”.

Shiroma Tax Office serves clients ranging from restaurants, retailers, and hospitals, to individuals and small businesses through big companies.  He’s confident that if foreigners “worry about something about those issues, just ask and they will be fixed.