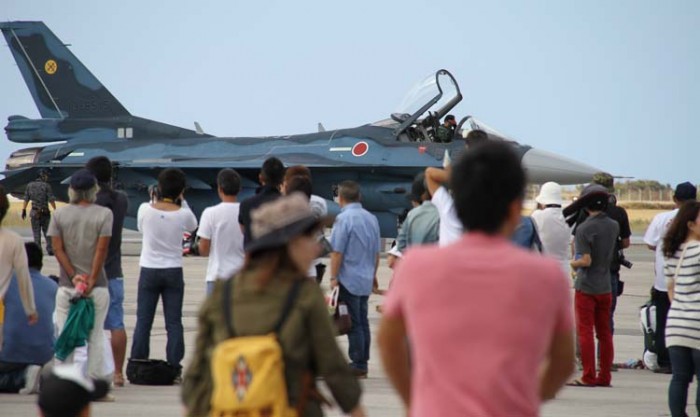 Visitors are interested in the JASDF Blue Impulse acrobatic flight team aircraft that was on display in last year’s show.

The Blue Impulse, the acrobatic team of the Japan Air Self Defense Force, will be performing Sunday at the Naha Air Base Air Festa 2014.

For those who’ve never seen a Japanese military air show, Sunday’s 8 a.m. ~ 3 p.m. free festival is something to see at the JASDF Naha Air Base, 301 Toma, in Naha City, adjacent to Naha International Airport.  The opening flight begins at 8 a.m., followed at 9 a.m. with F-15 fighter jets roaring overhead, followed by another aerial exhibition featuring helicopters as part of a joint performance involving other aircraft.  The Air Festa highlight is the Blue Impulse acrobatic flight show at 1:15 p.m. 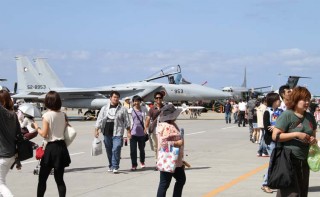 The static displays showcase most of the aircraft in JASDF arsenal.

No military show is complete without static displays of military equipment, and that’s true for Sunday’s Naha Air Festa.  Military displays from the Ground Self Defense Force, Maritime Self Defense Force and Air Self Defense Force will be open to the public to look, touch and take pictures.  Japanese and American military big bands are scheduled to play at the attraction site.

There is no parking lot at the Naha Air Base venue. Visitors must park at Naha Military Port and take a free shuttle bus to the festival.  Military organizers say portable chairs are not permitted at the air show.