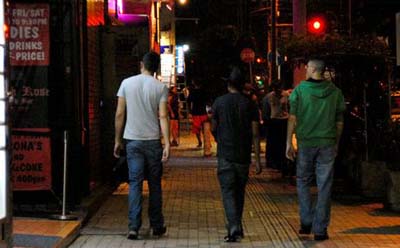 The new U.S. Forces Japan Liberty Policy allows more freedoms to servicemen and women who want to socialize in off base establishments.

Before the Liberty Policy came into effect 2 years ago, bars around the Sunabe Seawall were incredibly busy, packed wall-to-wall on Friday and Saturday nights. Unfortunately, a series of serious events led U.S. military authorities to create a strict set of rules for all U.S. service members.  These rules include a curfew from midnight that means having to report back to the base, hotel room or a private residence from the hours of midnight to 5 a.m.  Service members are also forbidden to drink at off-base bars, and limited to two alcoholic drinks with meals at local restaurants.

Although the rules may seem quite strict, the rape of an Okinawan woman by two sailors in Okinawa City, and the breaking and entering by another US service member who then proceeded to escape by diving out of window and falling two stories down onto the ground caused a surge of public outrage that led the military to issue these restrictions.

With the Liberty Policy now enforcing these restrictions, the number of incidents has changed with a historical drop. The crimes committed outside the base gates by the 47,000 status of forces visa holders on island (this includes troops, civilians and dependents) fell to 32 total offenses in 2013 from an average number of 56 per year over the previous 10 years. With statistics like these, it would seem that the drop in incidents on Okinawa is likely due to this revised Liberty Policy with the combination of solid leadership and training efforts to increase professionalism among the troops.

As of December 9, 2014, the Liberty Policy has been revised.  These restrictions are now loosened – curfew has been extended for an hour from midnight to 1 a.m., although off-base drinking is still prohibited from midnight to 5 a.m.

Bar and club owners are rejoicing now knowing that they can afford to keep their establishments open. Many of the bars have closed in the past two years since the restrictions have been in effect, and some transformed their establishments from a bar to a restaurant so that they could continue to survive.  However, there is no certainty for anyone that the Liberty Policy will stay this way.  Unfortunately, alcohol can be a cocktail of destruction for some people who cannot control their intake, overindulge and act foolishly.

U.S. Service Members and off-base business owners are all excited about their former customers finally being able to drink in bar. The boost in the number of patrons will help all of those bar owners who have toughed it out through the drought and are eagerly waiting for thirsty patrons.  If everyone can maintain their composure and drink responsibly, all residents can benefit from the Liberty Policy changes, and Okinawa can be a happier place for the service members can now join their local friends for a few drinks at the local bars.