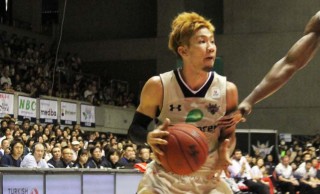 The Ryukyu Kings are red hot, handing out a double dose of punishment to the Osaka Evessa while running their win streak to eight consecutive games AND extending their record to 14-2, the best in the Basketball Japan League’s Western Conference.

It wasn’t a particularly difficult feat, even though it took place on Osaka’s home court.  The Golden Kings first stretched a 36-25 halftime lead to a 76-60 win behind power play by Anthony McHenry and his 21 points and a fist full of assists.  Draelon Burns contributed 13 points, while Ryuichi Kishimoto scored 10, Shigeyuki Kinjo nine and Kibwe Trim eight. Trim was also active on the backboards, pulling down 13 rebounds.  Okinawa’s head coach, Tsutomu Isa, was stoic, noting, “Evessa did not let us lead easily.  We often had to be patient, so it gave my players stress.”  That’s how Shunsuke Todo, the Evessa head coach felt, too, saying,  “We were not good on defense or offense.  We could not play our game and we made the biggest mistakes of the season.”

Sunday was even more fun for the visiting Okinawa squad as they pounded the Evessa 96-62, including 25 points in the final stanza.  Four Golden Kings scored in double-digits, led by Ryuichi Kishimoto with 19 points.  Narito Namizato and Anthony Kent each tallied 13 points while Anthony McHenry had 11.  For good measure, Hiromasa Omiya scored nine and Naoto Kosuge eight.

While the Golden Kings are pretty well known for putting together win streaks, the record is more impressive than the talk.  To date, the Golden Kings have captured 256 wins of 370 regular season games played since the excitement began in 2008.  That works out to an almost 69.2% in win column.

Elsewhere in the TK bj-League, the Iwate Big Bulls had no difficulty sweeping a pair from the 7-11 Takamatsu Five Arrows, taking 84-65 and 98-83 victories. Sunday’s win was Iwate’s 16th in a row, setting up its 17-1 record in the Eastern Conference.  In an off-the-pace series, the Niigata Albirex BB ducked out of a six-game losing streak to defeat the Shimane Susanoo Magic 76-61, only to lose again Sunday to the Magic 88-83.  Niigata is now 9-9, while Shimane is 2-16.

The Kyoto Hannaryz picked up a pair of wins over the Shinshu Brave Warriors, extending their record to 16-2.  They won 84-73 and 96-66 against Shinshu, while has lost three in a row and five of the last six games played, and are now resting with a 5-9 record.  The expansion Fukushima Firebonds found victory lane twice over the weekend, outpacing the Saitama Broncos 104-78 and 112-85.  Fukushima is now 6-12, while the Broncos have yet to win this season and are 0-14. This weekend Fukushima will face the Golden Kings in Ginowan Gym.