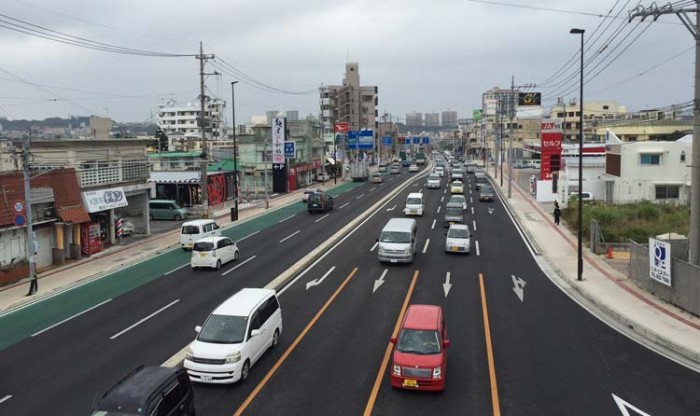 Starting Feb. 2, rush hour bus lanes on Hwy 58 will be extended to stretch practically all the way between Isa and Naha.

Traffic congestion for buses traveling both north and south on Highway 58 will lessen beginning February 2nd  but privately owned vehicle drivers will find the going more difficult as they no longer have access to the restricted bus lanes.

Okinawa Prefecture and Okinawa Prefectural Police are extending the restricted bus lanes in mornings 7:30 ~ 9 a.m. heading south to Naha’s Kumoji Intersection from Isa, the intersection on Hwy 58 at the southern end of Camp Foster.  Police say the exact enforcement runs continuously from Isa Intersection to Nakanishi (Gate 1 of Camp Kinser) on Highway 58, then to Jitchaku intersection in Aja, Urasoe City, and to Lawson at Ameku, Naha, and all the way to Kumoji.

The Prefecture’s original plan had been to extend the restricted bus lanes all the way to Okinawa City, but that’s been shelved for the time being.  Okinawa Prefectural Police have expressed their reservations about the restricted bus lanes, concerned that traffic on Highway 58 will become even more snarled.  The Okinawa Prefectural Office secretariat has in the past proposed placing staff along bus lanes as an educational means to teach drivers respect for the bus lanes.  The Prefecture also says it wants to do an educational campaign to encourage people to use public transportation instead of cars.