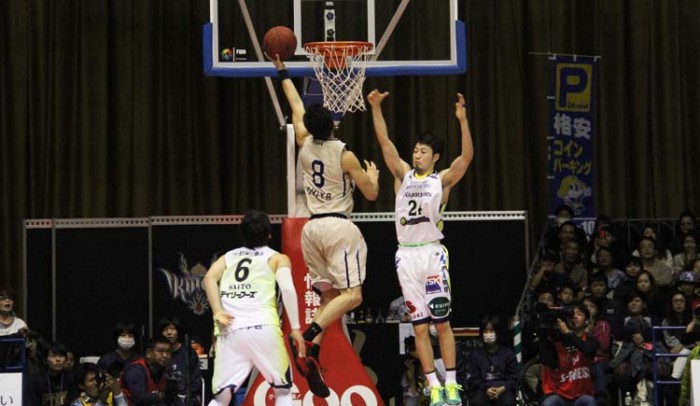 Hiromasa Omiya sinks one as the Golden Kings crushed Shishu Brave Warriors in both of their first games of 2015, on Jan. 2 and 3.

The Ryukyu Golden Kings keep finding their way into the win column, surrendering leads to nobody as they wound up 2014 and began their 2015 quest for another Basketball Japan League title.

The Golden Kings hit the road to cap 2014, drumming the Saitama Broncos in both matches.  The Kings beat up on the winless Broncos, winning 95-61 in the first tilt, and were a little more merciful with a 91-76 win in the second.  The victories put the Golden Kings in 2nd place in the BJL as the year ended, with 20 wins to their credit. 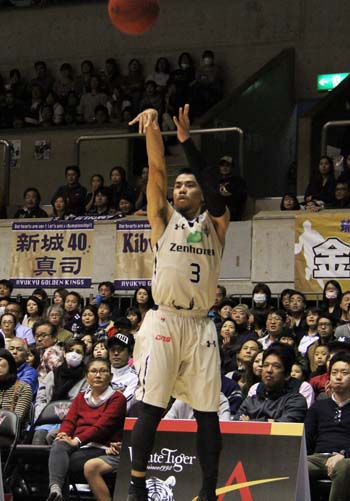 Narito Namizato shooting one from the 3-point range.

The Golden Kings stood tall in front of the home fans the first weekend of the new year, sweeping victories from the Shinshu Brave Warriors.  The 83-68 win in the first set made Okinawa’s head coach, Tsutomu Isa, a happy man.  “We feel happy to win in front of the home audience.  Today’s win was the team’s win.”

The wins pushed Okinawa to 21-4 overall, and 10-1 at home. Anthony McHenry and Ryuichi Kishimoto were lead scorers for Okinawa, each with 16 points, while teammates Naoto Kosuge and Draelon Burns dumped in ten apiece.  Anthony Kent entertained the home crowd in Naha with 15 rebounds.

The second in the series was more of the same, with the Golden Kings hammering out a 91-62 win.  Draelon Burns’ 23 points topped Okinawa’s performance, while Anthony McHenry and Ryuichi Kishimoto each picked up 15.  The Kings are now 22-4, while Shinshu falls to 9-15.  Okinawa’s head coach Isa noted the absence of Kibwe Trim for both games, but praised the team for pulling together, adding “I am satisfied with the aggressive offense of each one of the players.  Defense also went well, as I instructed.”  Ryuji Kawai, Brave Warriors head coach, was depressed, apologizing to his fans.  “We completely lost the game, and we apologize to boosters who came all the way from Shinshu to Okinawa.  We played a very embarrassing game, and will restart the new year.

Elsewhere in the BJL, the abbreviated holiday season schedule found the Hamamatsu Higashimikawa Phoenix rolling to a 13th straight victory with a 92-66 win over the Nara Bambitious.  Sunday the Phoenix made it 14 straight, going 11-1 in opponents’ territory, with a 79-65 win over the Bambitious. The Phoenix are now 22-3, while the Nara sit at 9-14.  The Oita HeatDevils picked up a win over the Saitama Broncos, 96-73.  A day later, a big celebration for Saitama: they picked up their first win of the year, a 101-87 victory that makes them 1-23 in league play.