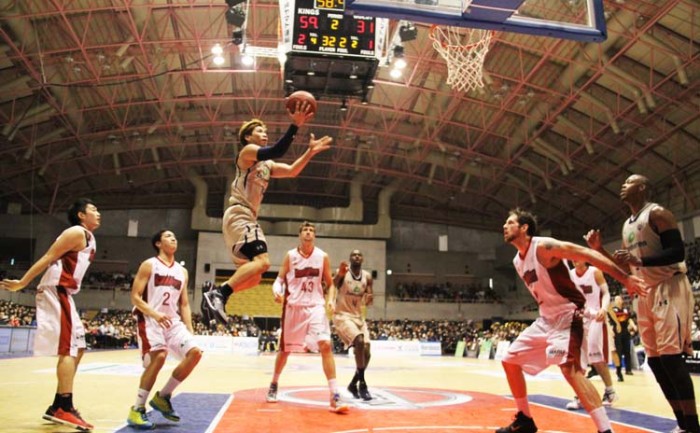 The Ryukyu Golden Kings were on the home hardwood in Okinawa City, pounding the Nara Bambitious to the tune of a weekend sweep that extended the season record to 24-4. 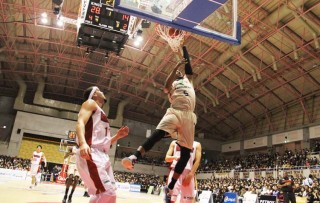 There was nothing even close in either contest, as Okinawa won the opener 87-62, then rolled to a 105-64 victory Sunday afternoon.  Anthony Kent was the hot gun for Okinawa Saturday, picking up 15 points while also snatching nine rebounds.  Kibwe Trim and Narito Namizato were close behind with a dozen points apiece, while Draelon Burns scored 11.  Shigeyuki Kinjo and Ryuichi Kishimoto were in the mix, too, with ten points each.

Tsutomu Isa, the Golden Kings bench boss, was elated.  “This was the first game in two weeks, so we were talking about enjoying playing the game with our home audience, and we were almost as good as we prepared.  The good thing is that every player played his role and we won.” 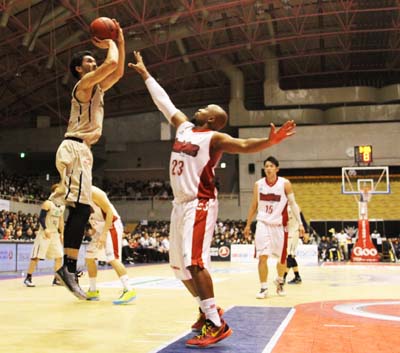 Sunday was even more of a power trip for Isa and the Golden Kings, as players just could not miss the basket.  Leading 63-33 at the half, Okinawa inspiration was even higher knowing that a win would keep them tied for the Western Conference lead.  It worked, with Kibwe Trim dominating with 18 points and 13 rebounds.  Anthony McHenry and Anthony Kent were up to the task with a baker’s dozen each.  Draelon Burns contributed a dozen, while Shigeyuki Kinjo scored 11.

“We completely failed,” said Nara head coach Ryutaro Onodera.  “We made a lot of mistakes both on offence and defense… and a top team cannot play like this”, he added while apologizing to Bambitious fans who’d traveled to Okinawa for the series.  Okinawa’s Isa called “today’s game important for the second half of the season.  Players played hard both on and off the court, and I was impressed by the professionalism.”

Elsewhere in the bj-League, the Fukushima Firebonds stunned the visiting Iwate Big Bulls Friday night, racking up a 79-74 win.  The 22-5 Big Bulls were hard pressed to find themselves on the losing end of the stick, particularly to a middle-of-the-pack 9-19 team.  Former Okinawa head coach Dai Oketani, now leading Iwate, praised Fukushima for playing aggressive, heads-up ball.  Oketani talked to his players after the game, and Saturday’s contest was a different matter.  Iwate didn’t have an easy time, but was strong enough to pick up an 84-76 win over the Firebonds.  Fukushima is now 9-19.

The Hamamatsu Higashimikawa Phoenix, leading the bj-League’s Western Conference, pounced on the Shiga Lakestars to pick up a 75-66 win, their 24th and 15th straight.  An easy weekend, thought the Phoenix.  That was not to be, as Sunday the Lakestars entered the stadium in Toyokawa, Aichi Prefecture, and snapped that 15-game win streak that also dropped the Phoenix into a Western Conference tie with Okinawa’s Golden Kings for the lead.  The Lakestars rolled out 33 points in the final stanza to win 89-84, and improve its record to 18-8.  The Niigata Albirex BB made easy work of the 1-26 Saitama Broncos, winning 93-81 and 104-86 to improve to 23-5.

Fukuoka’s got a new head coach, and his debut was a success. Joe “Jellybean” Bryant, whose motto is “If you can believe, you can achieve,” led his Rizing Fukuoka to a 72-70 win over the Shimane Susanoo Magic.  The weekend wasn’t all Fukuoka, though, as the Magic bounced back Sunday with a 90-74 win.  Neither team’s win was of consequence, as Shimane is now 9-19, while the Rizing’s sitting at 7-21.

The Kyoto Hannaryz smiled through its series with the Takamatsu Five Arrows, handily winning the opener 88-71, and the Sunday afternoon tilt 79-64.  Kyoto is riding high at 23-5, while the Five Arrows are 7-21.  The Toyama Grouses also swept their weekend series with the Tokyo Cinq Reves, blasting the visitors 91-54 in the opener, and 106-82 on Sunday.  Toyama is 21-7, while Tokyo fell to 4-26 as it lost a 15th consecutive game.

The Shinshu Brave Warriors didn’t let the weather deter them, squeaking to a 76-73 victory over the Yokohama B-Corsairs Saturday.  The optimistic feelings didn’t last, as The B-Corsairs roared back a day later to score an easy 95-76 win that improved their record to 12-16.  The B-Corsairs are now 6-22.  It wasn’t so easy for the Gunma Crane Thunders, who edged the Aomori Wat’s 76-66 on Saturday, but lost an overtime thriller on Sunday, 76-72.  Aomori stands at 15-12 with the weekend behind them, while the Crane Thunders are 8-17.

Osaka rolled into Kitsuki, Oita Prefecture, for a weekend series against the HeatDevils, and found it a very friendly place.  The Evessa won both games, 78-73 and 60-50, to improve to 17-11 on the year.  The Oita HeatDevils are 9-19.  The Akita Northern Happinets found Sendai an unfriendly place, as the Sendai 89ers busted a 12-game win streak with a 97-95 victory over their rival.  A day later, the Northern Happinets got revenger with an 84-75 win.  The Happinets are now 23-5 at the top of its conference, while the 89ers are 18-10.