Nobody knows how to stop Ryukyu Golden Kings 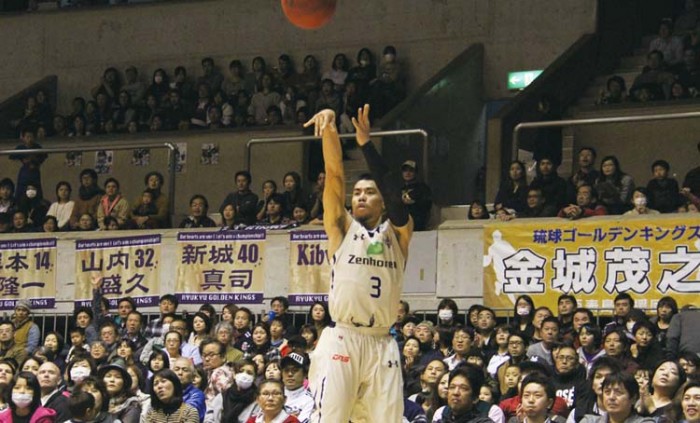 The Shiga Lakestars are in the top third of teams in the Turkish Airlines Basketball Japan League, but when confronting the defending league champion Ryukyu Golden Kings, that’s not good enough.  Shiga found that out over the weekend when the visiting Okinawa squad beat up on them twice.

The Golden Kings are leading the Western Conference standings with a 26-4 record thanks to a 75-54 victory in the series opener in Yasu, Shiga Prefecture, and another 21-point win Sunday, 87-66.  “We played with strong feelings that we cannot lose two times in a row,” says Tsutomu Isa, the Kings bench boss.  “Our players did good defense, and we mentally won the game.”

Narito Namizato led the Okinawa scoring parade with ten points, while teammates Anthony Kent and Draelon Burns each picked up eight as the King surged to a one-game lead over the Hamamatsu Phoenix.  Contributing seven each were Shigeyuki Kinjo and Naoto Kosuge.  Former Kings teammate Terrance Woodbury led the Lakestars with 18 points.

Okinawa was brutally stingy on defense Sunday, allowing only 22 Shiga points in the first half, en route to the 87-66 victory.  Draelon Burns was top scorer with 15 points, while Narito Namizato had 14, Anthony McHenry 13 and Anthony Kent an even dozen.  “We were relieved to win,” said coach Isa, “ while Lakestars coach Kohto Toyama called his squad “too careful about today’s game, and we lost it in the first half although we showed better play in the second half.

Saturday was a momentous day for the Takamatsu Five Arrows as they broke a 14-game losing streak by beating the visiting Rizing Fukuoka.  Takamatsu’s squeaky 88-86 win was a motivator that propelled the Five Arrows to a series sweep with another nail-biter, winning 76-75 to push their record to 9-21.  The Rizing is now 7-23.  The Yokohama B-Corsairs eked out a 69-58 win over the Aomori Wat’s in Hirasuka, Kanagawa Prefecture Saturday, but couldn’t keep the momentum as Aomori roared back Sunday to pull the rabbit out of the hat with a one-point 72-71 win.  Aomori is now 16-14 on the year, while Yokohama’s 7-23.

The Toyama Grouses split a series with the lowly Saitama Broncos, pulling off an easy 93-74 Saturday win, only to be slapped alongside the head as they lost 97-90 a day later. Toyama’s now 22-8, while jubilation came from the Broncos bench as they won their second game of the season against 28 losses.  Also in the series split business were the Oita HeatDevils and Hamamatsu Phoenix.  The HeatDevils won 82-74 in the series opener, but the Phoenix turned the tables, 87-64, to even the series.  The HeatDevils are 10-20, while Hamamatsu is 25-5 in the Western Conference behind Okinawa.

The Iwate Big Bulls swept their series against the Gunma Crane Thunders, rolling to a 91-74 win in the opener, and keeping the pressure on Sunday with a 95-85 victory.  Iwate’s now 25-5, while Gunma’s 9-19.  The Sendai 89ers couldn’t keep everything in order for a sweep over the Niigata Albirex BB, winning in overtime Saturday, 83-80, but losing a day later by three-point margin, 71-68.  Niigata’s now tied with Sendai in the win-loss column, each with a 19-11 record.  The Nara Bambitious picked up a single-point win over the Shimane Susanoo Magic, 85-84, in their series opener, but a day later the Magic turned the tables and pulled off a single-point win of their own, 74-73.  Nara’s now 10-20, the same record as the Shimane Susanoo Magic.

It was a weekend of smiles for the Akita Northern Happinets, who smashed the expansion Fukushima Firebonds 90-66 and 80-78.  Akita is riding high at 27-5, while the Firebonds are 9-21.  The Kyoto Hannaryz bulldozed past the Osaka Evessa twice last weekend, winning the opener 70-58, then had an easy Sunday, winning 81-59 to extend the Akita record to 25-5.  Osaka slides to 17-13.