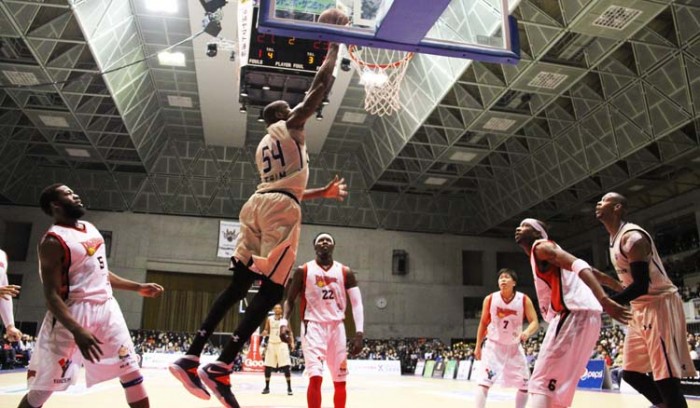 Kibwe Trim scored 12 point in Saturday’s effort against Higashimikawa Phoenix that the Kings lost 74-67, but his 13 points on Sunday helped the team to redeem itself and score a 82-63 victory.

Okinawa’s home crowd of more than 3,568 was stunned by the visiting Hamamatsu Higashimikawa Phoenix Saturday, watching the Ryukyu Golden Kings go down in flames 74-67 on the strength of the visitors’ 13-of-28 three-pointers. 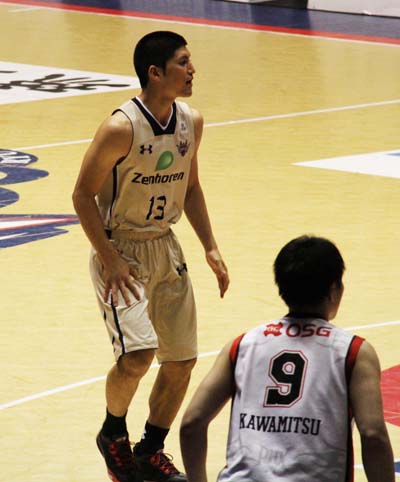 Kings’ rookie Shota Tsuyama made his fist appearance on the hardwood as a Golden King Saturday.

The Golden Kings were weak during the second and third quarters, being outshot 43-30.  Still, Okinawa had four players in double figures: Ryuichi Kishimoto with 13, Kibwe Trim and Anthony McHenry each with a dozen, and Draelon Burns with ten.  Narito Namizato picked up eight points.

“We completely lost it,” is how Okinawa head coach Tsutomu Isa described the night.  “We made mistakes we shouldn’t do, while Hamamatsu scored points, and we need more than 67 points to win.”  The Phoenix are just a half-pace behind the Golden Kings atop the Western Conference scoreboard, and the Hamamatsu moved them into a tie for the conference lead.  “It was a tough game,” said Tomoya Higashino, the Phoenix coach.  “Now we’ll focus our energies and fight on tomorrow.”

Sunday came, and it was an entirely different atmosphere in the Okinawa gymnasium.  The Golden Kings pushed back, turning 61% of their field goal shooting into scores en route to an 82-63 victory.  It was important both psychologically and from a statistics standpoint, as the win pushed Okinawa to 27-5 and sole possession of the Western Conference Basketball Japan League lead. ”We could not lose,” said Golden Kings coach Isa.  “Our players were so patient and confident.”  Higashino, head bowed, conceded “we were completely defeated.”

Draelon Burns was on top of the Golden Kings scoring ladder with 22 points, followed by Kibwe Trim with 13 and Ryuichi Kishimoto with ten.  Anthony McHenry picked up nine, as well as eight rebounds, while Morihisa Yamauchi had nine points, too. 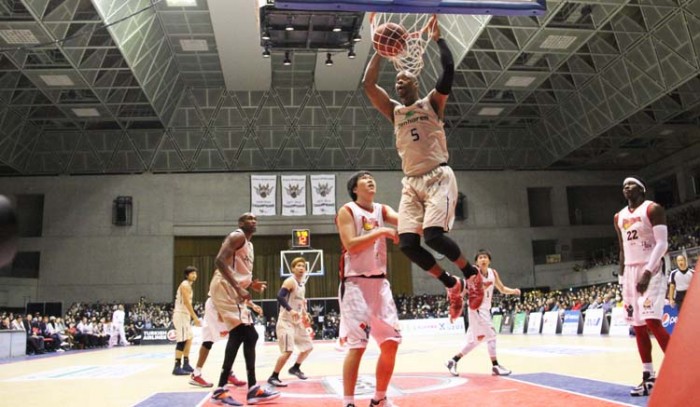 Even Anthony McHenry’s efforts were not enough to save Kings Saturday, but Sunday’s game was a different story as the Kings regained their posture and won 82-63.

Elsewhere in the TK BJL, it was a traumatic weekend for the Tokyo Cinq Reves, who were hammered by the Gunma Crane Thunders for their 16h and 17th straight losses. Gunma won the series opener 81-73, then picked up another eight-point win, 79-71, on Sunday to extend its record to 11-19. Tokyo is now 4-28.  On the opposite side of the coin, the Akita Northern Happinets were elated with its 97-74 attack on the Iwate Big Bulls Saturday, giving the Happinets 16 wins against a single loss in the past 17 games.  Iwate didn’t take the loss well, pressing hard and pulling off a 69-68 Sunday afternoon win.  The Northern Happinets re now 28-6, while the Big Bulls are on their tails at 26-6.

The Toyama Grouses were also inconsistent over the weekend, winning over the Fukushima Firebonds 101-88 in their series opener, only to fall to the pressing Firebonds 89-87 on Sunday.  Toyama is 23-9, near the top of the conference, while Fukushima’s 10-22.  The Shinshu Brave Warriors pushed hard Saturday to edge the Sendai 89ers 86-83, but the pesky 89ers came off the bench Sunday fired up, snatching an 85-69 win to push the season record to 20-12.  The Brave Warriors are 13-17.

Osaka was hot through the weekend pounding the Fukuoka Rizing 79-66 and 82-74 to extend its conference lead to 19-13.  The losses pushed the Rizing to the conference cellar sporting the worst record in the conference, 7-25.  The Kyoto Hannaryz wanted a sweep, but didn’t get it against the Takamatsu Five Arrows.  Kyoto won the opener 87-66, but were stunned with the Five Arrows 74-66 Sunday comeback.  Kyoto’s still 26-6 at the top of conference standings, while the Five Arrows are 10-22.

The Susanoo Magic settled with a series split with the Shiga Lakestars, winning the opener 83-65, only to lose the Sunday contest 90-72.  Shimane is now 11-21, while the Lakestars are 19-11.