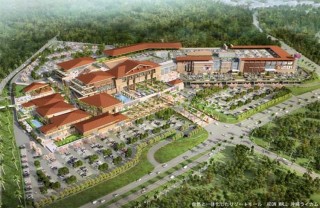 Orion Breweries, Ltd. announced a plan to launch a large beer terrace at AEON Mall Okinawa Rycom that is scheduled to open in April in Kitanakagusuku.

According to a company spokesman, ‘Orion Beer Terrace’ will consist of four restaurants featuring Mexican-American cuisine, local Okinawan food, yakiniku, and beer hall. The Beer Terrace will be located in a two-story building currently under construction as a part of the AEON Mall Okinawa complex. The terrace has a total floor space of about 1,487 square meters.

In the space shared by the four restaurants, the company plans to have a display introducing the history of Orion Beer, and also portraits of successive Orion Beer girls. The facility aims at dispatching of company information to both local people and overseas tourists, and be as a pillar of advertising to Orion Beer.