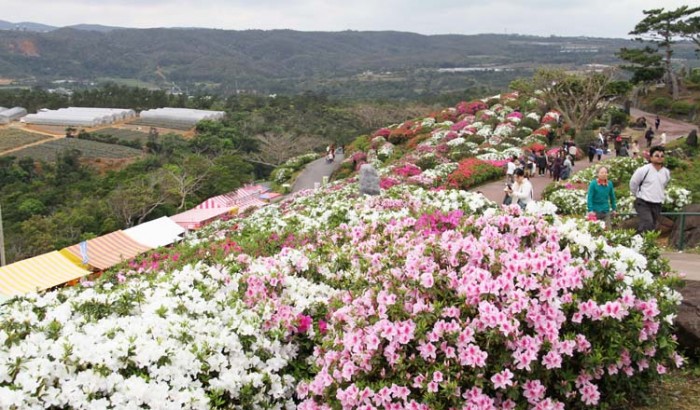 Azalea are called “Royalty of Garden” and 50,000 of them cover a hilltop park in Higashi Village.

Fifty thousand azaleas are beginning to show their colors in northern Okinawa, only weeks after cherry blossoms made their 2015 debut. 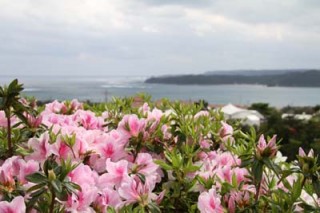 The flowers bloom through the whole month of March.

Azalea, the delicate flower called ‘royalty of the garden’ is making its annual splash beginning Sunday as the Higashi Village Azalea Festival begins its three-week run.  The pink shell azalea is one of the season’s first flowers to bloom, brightly coloring the hillside park at Higashi Village in the Kunigami District of Okinawa’s east coast.  Admission to the 33rd annual Azalea Festival, which runs through Sunday, March 22nd, is ¥300 for adults and high school age students. The festival is free to those under age 15. 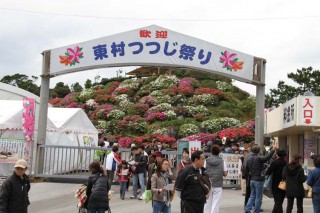 Admission to the park is ¥300 for adults and high school age students during the festival, younger get in for free.

The flowers, which typically measure 1¼” to 2¼”, have unique spotting along the throat.  The festival annually attracts more than 80,000 visitors, lured not only by the azalea, but by the pineapple fields and Higashi Village water, said to be the purest in Okinawa.

Festivities begin Sunday at 1:30 p.m., with Aimoco live.  Additional entertainment on Saturday the 7th comes from the Nishihara High School Marching Band, Don’t STLOP and Soluna, leading into a weekend of live music and dance. Sunday’s entertainment on the 8th includes a magic and street performance by Clown Kotora and magician Shoto, as well as Maruke.  There’ll be live music again the weekend of March 14th and 15th with RBC Radio liv with Okinawan folk songs by Shuken Maekawa, Mayumi Yamakaw and Shimauta Girls 10, and a karaoke competition.  On the March 21st Japanese holiday look for traditional performing arts, dance and karate, as well as Ryuta Shiroma live.  On Sunday the  22nd local college students present Eisa and a Taiko show.