“In Okinawa, there are both Japanese and non-Japanese business people, so why don’t we get together to expand our opportunities to our mutual benefit?” 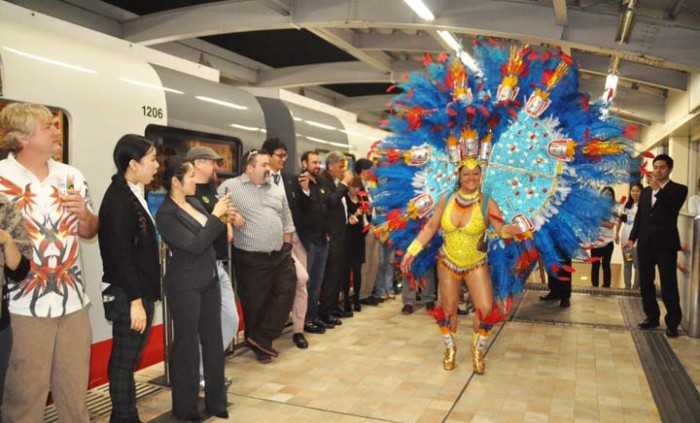 The Networking Dinner offers some surprises from time to time.

That’s what Mike Holland, one of the founders of the English Networking Dinner, is always saying.

The English Networking Dinner is a business network club started in 2013 as the brainchild of Mike Holland and Michael Hertz. Initially, there were only 15 members, but the concept’s gained momentum. The group meets every month either on or off base, and has been offering not only networking opportunities to participants, but has also increased cultural understanding for people from various backgrounds. 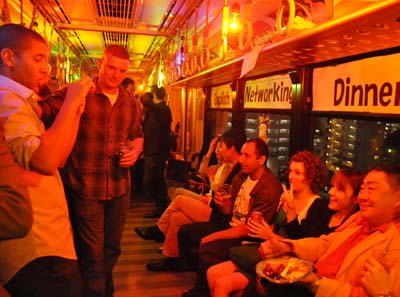 The atmosphere in the Yui Rail train was decidedly festive.

Group membership expands almost every month, and now has as many as 600 members. Monthly meetings gather about 100 attendees.

The February get-together was something unusual, and literally moving. It took place on the monorail. Okinawa Monorail is a public transportation system in Naha, commonly called “Yui Rail”, that runs from Naha Airport through downtown Naha to Shuri.

A specially rented monorail saw 110 members of the networking group pile aboard as it departed from the Naha Airport Station and went through all the 15 stations on the line. Inside the cars, attendees had their fill with Bovino’s Brazilian BBQ and fresh Kokopelli Pizza, and flushed it down with Orion draft beer and awamori from Masahiro Shuzo.

Commuters waiting on the stations were surprised to see the train pass the station at slow speed, with people inside drinking and dancing. Slight jolts of moving cars made participants drink faster than usual and gave many a little courage to start conversation with new friends.

When the train arrived at the final station at Shuri, a samba dancer suddenly appeared, adding even more excitement by her lively performance. People were busy taking selfies with the dancer and their new friends.

One of the regular attendees, Yoshifumi Kamimura from Adhoc Management said, “Even shy Japanese can mingle with a lot of international business people in these gatherings” Another member, Michael Davison, was excited. “I was able to promote my Pizza shop a lot, this was a great opportunity.”

The English Networking Dinner organizers say every businessman or woman is welcome to take part in their activities. For more information, contact Mike Holland at info@studyandinternjapan.com