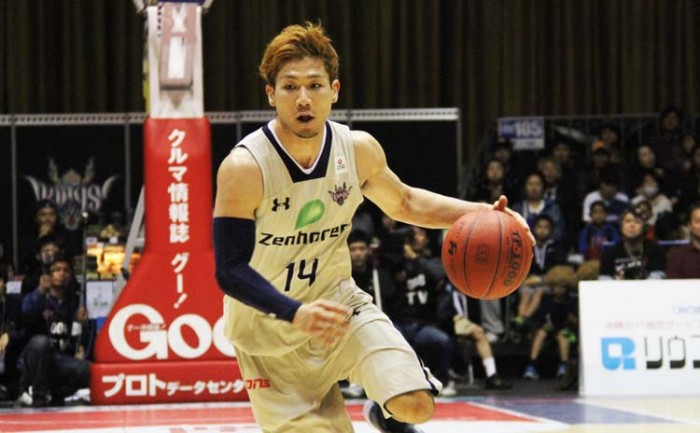 Ryuichi Kishimoto has been on tear recently scoring 18 points on Saturday followed with 15 on Sunday, both the team’s best.

Being on the road was no handicap as the Ryukyu Golden Kings invaded Takamatsu, where the Okinawa squad crushed the Takamatsu Five Arrows on both ends of the double-header. 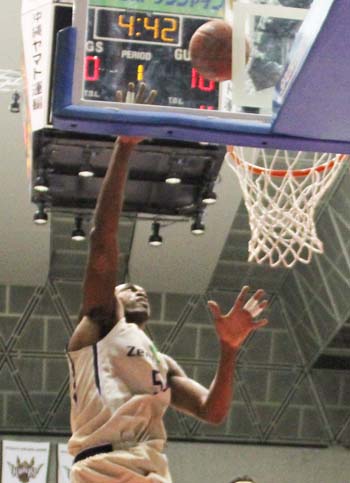 Okinawa took Saturday’s 87-72 victory on the strength of its rebounding, plus a team-best 18 point performance from Ryuichi Kishimoto.  The Golden Kings won the rebound battle 57-37, and found Draelon Burns hot with 17 points, while teammates Anthony McHenry and Kibwe Trim each picked up a dozen.  Those blocked shots and rebounds helped a bunch, with Anthony Kent batting away nine shots, while Hiromasa Omiya tipped three and McHenry two.  Narito Namizato accounted for another seven rebounds.

“We wasted time in the first 20 minutes,” explained Okinawa head coach Tsutomu Isa.  Takamatsu’s energy level was higher than ours, pushing us to stay on defense.”  Isa fixed that in the second half, but wasn’t happy:  “It was not good at all”, he said shaking his head.  Kenzo Maeda, the Takamatsu head coach, was pleased to remain in contention against the Golden Kings, noting “there were many good plays and our defense was functioning. The thing we need to do is decrease mistakes and then there’s a chance to win.”

Sunday was different, as Okinawa had no patience with the Five Arrows en route to a 102-63 victory.  The Golden Kings extended the season record to 32-6 with the victory. Ryuichi Kishimoto was Okinawa’s top scorer with 15, followed by Naoto Kosuge and Kibwe Trim, who each chalked up 14.  Morihisa Yamauchi scored 12, while Narito Namizato picked up 10 and Draelon Burns nine. 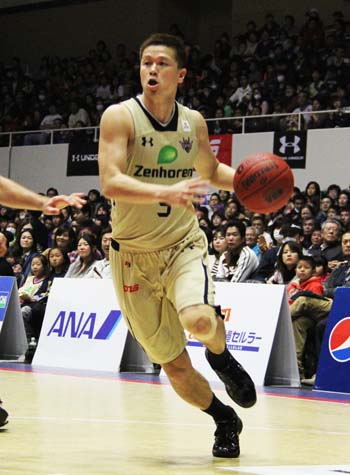 Okinawa’s coach was happier about the Sunday win, pleased with “taking all four victories in away games”, but cautioning “we still have a home game inviting Takamatsu to Okinawa the week after next.” Still, he pleasure showed as he added “as a coach I am satisfied with players who concentrated and focused on the game for 40 minutes.”  Five Arrows coach Maeda says his team “really apologizes for all the boosters who came to cheer for us. We were frustrated and played very childish, and of course cannot lose the next game with Shimane.”

Elsewhere in the Basketball Japan League, the Fukuoka Rizing rolled to a weekend sweep at home against the Nara Bambitious with play that belied its 10-27 record.  The Rizing won 99-94 in the opener, and 105-82 in the Sunday afternoon contest.  Nara’s now 10-28.  The Shimane Susanoo Magic picked up a Saturday win in a low scoring contest against the Oita HeatDevils, 63-56, but couldn’t hold on Sunday, losing 86-82 in overtime.  Oita’s now 14-24, while the Magic is 13-25.

It took overtime, but the Shinshu Brave Warriors took advantage of every shot to defeat the Akita Northern Happinets 100-94 in their series opener.  Sunday was the other way around, as the Northern Happinets, still stunned by Saturday’s loss, pushed to a 109-81 win to extend their record to 30-8.  Shinshu is now 15-21.  The Hamamatsu Higashimikawa Phoenix were on a weekend roll, upending the Osaka Evessa twice. The opener took overtime to achieve, as the Phoenix battled to stay even with Okinawa and Kyoto for the Western Conference top spot.  They won 80-76 Saturday, and 74-65 Sunday, pacing the Golden Kings to stay at 32-6.  The Kyoto Hannaryz did the same, sweeping their series with the Shiga Lakestars to also stay in the three-way tie for the Western Conference lead.  They beat Shiga 75-57 on Saturday and 74-55 in the Sunday afternoon tilt.  Shiga is now 22-14.

The Iwate Big Bulls weren’t taking any guff from the Aomori Wat’s, sweeping their series to go 31-7 in Eastern Conference play.  Iwate won 87-54 in the opener and 79-77 in overtime on Sunday.  Aomori is now even at 19-19.  The Fukushima Firebonds couldn’t find the range over the weekend, losing to the Yokohama B-Corsairs 85-68 and 98-80.  The wins give the B-Corsairs a more respectable 10-26 record, while the Firebonds are 12-26.

The Niigata Albirex BB slide past the Toyama Grouses in their series opener in Toyama, 80-77, then had a somewhat easier time Sunday in winning 82-71.  The Albirex are now 24-14, and the Grouses are 26-12 after the pair of losses.