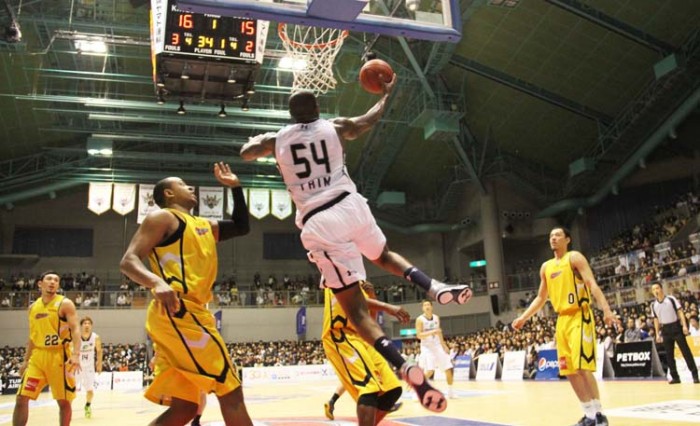 The Basketball Japan League season is moving to its final weeks, and in the Western Conference Ryukyu Golden Kings are not taking any guff from anyone, despite having a couple of its floor leaders out of action.

Demonstrating his skills in front of the home fans in Ginowan, Kibwe Trim poured in 24 points against the Takamatsu Five Arrows in this week’s series opener, and added a dozen rebounds as the Golden Kings trounced the visitors 84-59.  Anthony Kent accounted for four of nine shots blocked by the Kings, while Ryuichi Kishimoto picked up 15 points.  Morihisa Yamauchi, Narito Namizato and Hiromasa Omiya each scored nine points and rookie Shota Tsuyama accounted for seven points in only his ninth professional appearance. 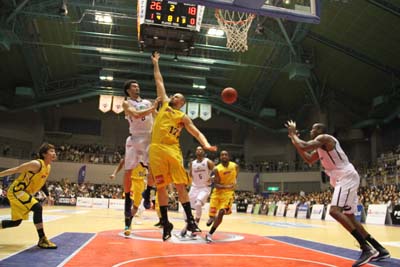 Hiromasa Omiya passing the ball to Anthony Kent (right) for a score.

Still, team boss Tsutomu Isa wasn’t happy, mustering “we wasted time for the first 20 minutes and the energy level of Takamatsu was much higher than ours.”  He talked to the squad at halftime, telling them “we should do what we need to do” but didn’t feel they were listening.  “The only good thing was that we won the game today.”  Losing head coach Kenzo Maeda thought  “there were not many turnovers, but we could not finish the game for good shots.  We need to decrease mistakes.”

Okinawa was playing without the services of Draelon Burns, who is out for three weeks with a right knee injury.  Anthony McHenry saw limited action due to foot pain that reduced his practice time.

Sunday was more of the same for Okinawa, although Takamatsu narrowed the gap in falling 67-55.  With the season winding down the end of next month, the Golden Kings were pushing hard to regain the lead in the Western Conference, now being led by Kyoto. Okinawa is now in a 35-7 tie for the lead after Kyoto took a loss, preparing for a weekend on the road before returning to Okinawa City Gym on the 28th and 29th for a return series with the Kyoto Hannaryz for conference bragging rights.

Okinawa’s challenger in the Western Conference, the Hamamatsu Phoenix, pulled off a sweep of its own against the Osaka Evessa, snapping a two-game losing spurt.  Saturday the Phoenix pulled off an easy 81-62 victory, then clung to a narrow lead to win 73-65 on Sunday to stay close behind the Golden Kings with a 34-8 record.  Osaka is now 23-19.  The Western Conference leaders, the Kyoto Hannaryz, made mincemeat of the Shiga Lakestars on Saturday, winning 86-63, only to get pummeled themselves Sunday, losing to the 25-15 Lakestars 76-62.  The loss put Kyoto into a 35-7 tie with Okinawa.

The Susanoo Magic was tough over the weekend, sweeping a series with the Oita HeatDevils 74-69 and 83-80. Shimane is now 16-26, while Oita is 15-27.  The Nara Bambitious emerged victorious in an 88-87 squeaker over the Fukuoka Rizing, then saw the tables go the other way on Sunday as the Rizing rallied for a 73-67 win.  Neither team’s in playoff contention, with Nara now 12-30 and Fukuoka 11-31.

The Eastern Conference-leading Akita Northern Happinets rolled up a pair of wins over the Tokyo Cinq Reves over the weekend.  Akita picked off Tokyo 87-58 in the opener and 101-60 in the Sunday climax to extend its lead to 34-8.  Cellar-dwelling Tokyo falls to 5-35.  The Toyama Grouses made quick work of the high powered Iwate Big Bulls in their series opener, winning 81-68, then stunned the Big Bulls Sunday as they took an 81-79 win.  The Big Bulls slip to 33-9, while the Grouses improve to 29-13.

The Shinshu Brave Warriors headed into Aomori Prefecture for the weekend, defeating the hosts 86-83 in the opener.  Sunday was turnaround time for Aomori, who pulled off a strong 84-65 win over the visitors.  The Wat’s now even at 21-21, while Shinshu sits at 18-22.  The Yokohama B-Corsairs split their series with the Niigata Albirex BB in Yokohama.  Yokohama took the opener 80-77, but the visiting Albirex BB grabbed a ten-point 91-81 victory on Sunday.  Yokohama’s now 11-29, while the Albirex BB improve to 27-15.

It was a winning weekend for an expansion team, the Fukushima Firebonds, against the hapless Saitama Broncos, who have yet to win a game at home this season.  The Firebonds took the opener 97-80, followed by a 91-77 trouncing of the Broncos on Sunday.  Fukushima is now 14-28, while Saitama is 4-36 on the season but 0-19 at home.  The Sendai 89ers were happy with their performance as well, sweeping a series in Shibukawa from the Gunma Crane Thunders.  Sendai won the opener 87-75, and the Sunday afternoon tilt 87-72.  Sendai is now 28-14, while the Crane Thunders are 15-25.