Golden Kings slip to 2nd after being stunned by Oita 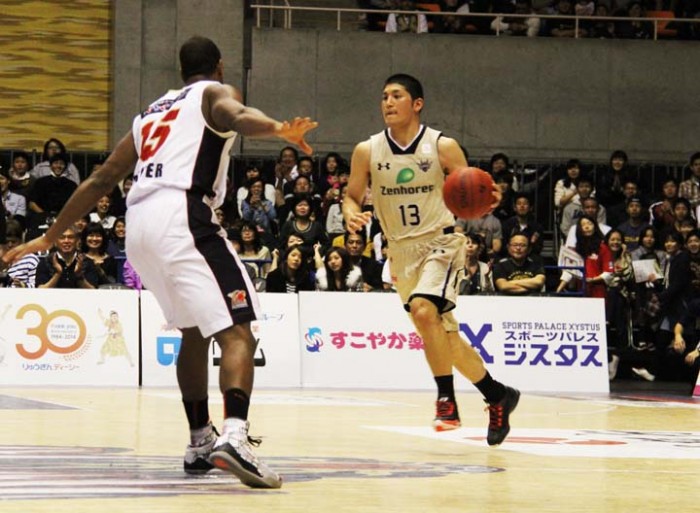 The Ryukyu Golden Kings were riding high in the Basketball Japan League’s Western Conference after an easy series opener against the Oita HeatDevils, but encountered a fired up squad that battled hard on Sunday to hand Okinawa a loss.

The loss dropped the Golden Kings to 36-8, a game behind the Kyoto Hannaryz, as the season heads into its final weeks. 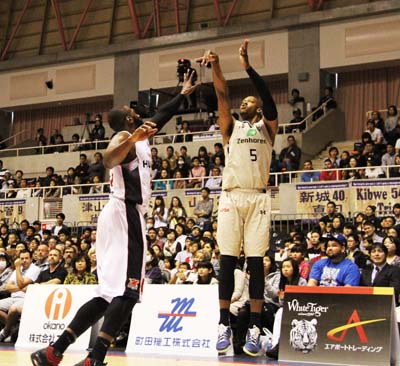 Anthony McHenry (#5) was not in his best physical condition but still contributed 15 points Saturday.

Okinawa had little trouble handling the middle-of-the-pack HeatDevils on their home turf Saturday, winning 82-72 behind strong shooting by Narito Namizato, who pocketed 19 points, and teammate Shota Tsuyama who added 17.  Anthony McHenry was close behind with 15, plus contributing a dozen rebounds.  Golden Kings head coach Tsutomu Isa praised Oita, noting “we won, but they really made it difficult for us.” Oita’s head coach, Yuuki Suzuki, complained “small mistakes derailed our efforts” and noted “I want to take revenge tomorrow.”

Suzuki’s squad did exactly that, taking advantage of strong shooting and a tough defense while feeding on the cheering from the home fans, to pull out a 72-69 victory.  The 16-28 HeatDevils had lost three times in earlier matches against Okinawa.  Ryuichi Kishimoto and Kibwe Trim each had 17 points in the losing effort, while Naoto Kosuge picked up 10 and Narito Namizato scored eight and Anthony McHenry six points.

Oita’s Suzuki was elated “we proved it possible for us to win a cross game, and we did not make the mistake of going along with the flow of our opponent.”  That’s what happened to Okinawa, as coach Isa noted, “although our defense was able to suppress the opposition attacks 72 times, our shooting was off mark and we could not control the flow of the game.”

Kyoto, meanwhile, swept its series against the other Western Conference contender, the Hamamatsu Higashimikawa Phoenix, to regain the conference lead. They improved to 37-7, a game ahead of Okinawa, with a Sunday 75-69 win.  Kyoto upped its road record to 18-4 as they played and defeated the Phoenix in front of 5,611 fans at Hamamatsu Arena. They’ve won 11 of their 12 most recent games. Hamamatsu is now 34-10.

The Iwate Big Bulls powered their way past the Shinshu Brave Warriors 85-56 in their series opener, but had to work hard for a second win in a 77-75 squeaker.  Iwate is now 35-9 in the Eastern Conference, while the Brave Warriors are 18-24.  The Aomori Wat’s swept a series with the Saitama Broncos, taking 87-62 and 77-58 victories. Aomori is now 23-31 and the Broncos 4-38.  The Fukushima Firebonds were twice victorious against the Gunma Crane Thunders, winning 108-78 and 84-64. The wins were enough to keep 8th place Fukushima in the hunt for a playoff birth, improving to 16-28. The Crane Thunders slide to 15-27.

The Osaka Evessa slipped past the Shimane Susanoo Magic, 80-77 in the opening series contest, then held on for a 73-70 win in the second.  Osaka improves to 25-19, while the Susanoo Magic slip to 16-28, just barely still in the race for a chance at the playoffs.  The Takamatsu Five Arrows took a series from the Nara Bambitious, winning 83-77 at home in the opener, and then 87-61 in the second face off.  Nara’s 12-32 now, while Takamatsu is 13-31.

The Toyama Grouses were also victorious twice over the weekend, sweeping its series against the equally strong Akita Northern Happinets.  The 31-13 Grouses won 91-82 and 94-82 against Akita.  Akita suffered heavily with the losses, which dropped them to 34-10 in a competitive race to the regular season finish line.