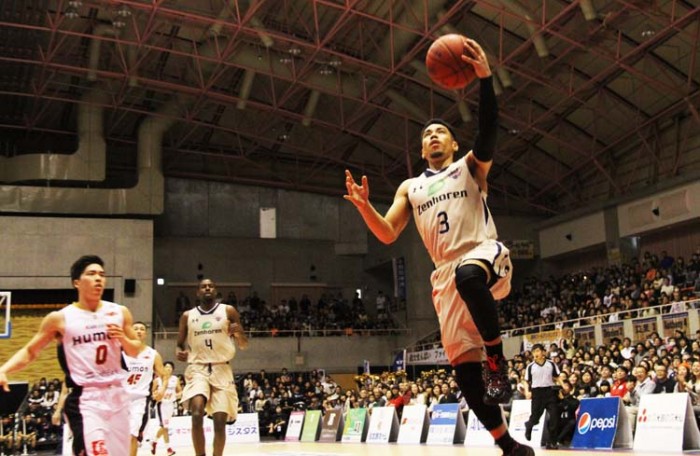 The powerhouse Western Conference leading Ryukyu Golden Kings found themselves in trouble in front of the home crowd as the Osaka Evessa threatened Saturday and then pounded the Okinawans on Sunday. 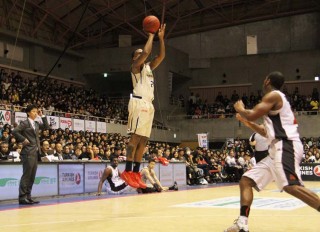 Draelon Burns put in a hard day’s work and scored 29 points in Saturday’s game that the Kings won 75-73. Sunday’s match was not as good as the Kings lost 72-69.

After three victories against Osaka earlier in the season, the Evessa pressed at every turn and forced the struggle before the Golden Kings finally won 75-73 in the opening game.  That win was spurred by Draelon Burns, whose 29 points proved to be the difference.  Only Kibwe Trim was able to join Burns in the double-digit club during the evening in Okinawa City.

Okinawa head coach Tsutomu Isa was happy to be playing at home and confessed, “We made a lot of mistakes and exposed the sleekness of offense.”  Had they been on the road, he didn’t think the outcome would have been the same.  Shunsuke Todo, Osaka’s head coach, predicts his team’s level of play proves, “We are going to a higher level, neck and neck with strong teams.”

Sunday that proved to be the case as Osaka bounced back after trailing early in the afternoon to pull off a 72-69 overtime win, stunning the Okinawa home fans.   Osaka improved to 23-17 with the win, their first after three consecutive losses, while punishing the Golden Kings and dropping them to 33-7. 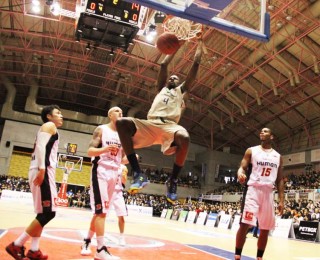 Anthony Kent was top scorer for Okinawa with 14, while Saturday’s scoring leader, Draelon Burns, ended up with 11 points and a dozen rebounds.  Kibwe Trim also scored 11, and Naoto Kosuge closed out the afternoon with seven points.   Head coach Isa was concerned, “The aspect of our weakness was revealed when the game was close, and Osaka was way above the Kings in terms of confidence of taking the ball to the hole, and the strong will to beat their opponent.”  He predicts Okinawa must work hard, or else find themselves playing “games that will be naturally difficult to win with top teams.”  Opposing coach Todo was happy that “we finally won the game. Today’s victory means something.”

As the Golden Kings head into next action this weekend, the team will wear its white uniform in both weekend matches in honor of Saturday’s White Day.  Normally they wear the white uniforms only at away games, but wear it at home this one time only.  The weekend matches also sees spectators receiving All Nippon Airlines ~ Golden Kings collaboration badges, and there’ll be raffle opportunities to win an ANA ticket.

Elsewhere in the Basketball Japan League, Niigata’s Albirex BB rolled to an 87-70 win over the Gunma Crane Thunders behind the power of University of Detroit Mercy’s Thomas Kennedy, now an Albirex forward.   It was more of the same on Sunday. The Albirex improved to 26-14 on the strength of a 101-73 win.  Gunma is close on their heels with a 15-23 record.  The Takamatsu Five Arrows made easy work of the Shimane Susanoo Magic 95-73 in their series opener, but couldn’t maintain the momentum on Sunday, losing 96-78.  Shimane’s win puts the Magic at 14-26, while the Five Arrows fall to 11-29.

The Akita Northern Happinets slid past the Yokohama B-Corsairs 102-93 on Saturday, and made it a sweep on Sunday with a 94-88 win to up their record to 32-8.  Yokohama is now 10-28.  The Hamamatsu Phoenix were easy pickings for the Kyoto Hannaryz, falling 77-56 in their series opener, then made the sweep complete with a 77-67 Sunday victory.  Kyoto is now 34-6, while the Phoenix felt the pain of ending a six-game win streak to sit at 32-8 in the standings, a game behind the Ryukyu Golden Kings.

The Sendai 89ers entertained the home crowd with a 107-67 crushing of the Fukushima Firebonds on Saturday, then went 106-77 on Sunday to extend its record to 26-14.  The Firebonds slide to 12-28.  The Toyama Grouses had little difficulty against the Aomori Wat’s, using a team scoring approach and strong rebounding to win 76-61 in the series opener in Toyama, but couldn’t hold on Sunday, falling to the Wat’s 96-81.  The Wat’s are even at 20-20, while the Grouses are 27-13.

The Shinshu Brave Warriors eeked out a simple 91-75 win in Tokorozawa, Saitama Prefecture, against the Saitama Broncos.  The Brave Warriors continued strong, pulling off a Sunday 98-84 win.  Shinshu started slow on Sunday, but were never challenged.  The Brave Warriors are now 17-21, while Saitama sits in the cellar at 4-34.  The Iwate Big Bulls had no trouble at all over the weekend, thumping the Tokyo Cinq Reves 84-64 and 94-87.  The Big Bulls are riding high in the Eastern Conference, on top with a 33-7 record, while Tokyo’s suffering at 5-33.

The Oita HeatDevils invaded Nara Prefecture to take a series opener from the Nara Bambitious 90-65, only to fall 76-74 in a squeaker to improve to sit at15-25.  The Bambitious are now 10-29.