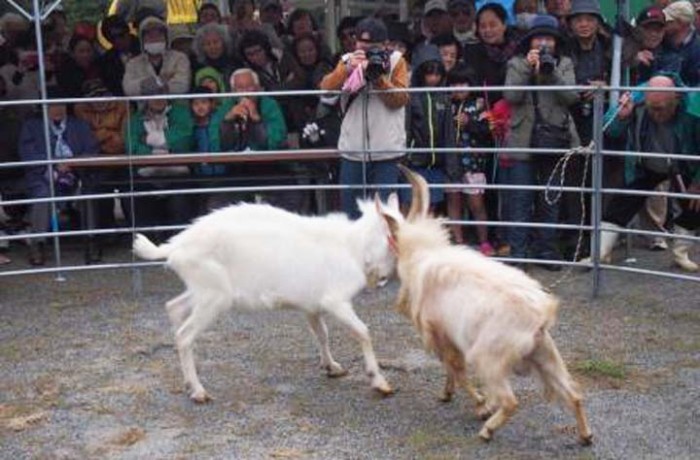 Goat fight tournament is an attraction at the festival, augmented by a raffle that gives on lucky winner a goat of his or her own.

The 11th Katsuyama Shiquasa Flower Festival is more than simply flowers and food, as organizers are ready to show visitors a pair of Nago area mountains to hike this weekend. 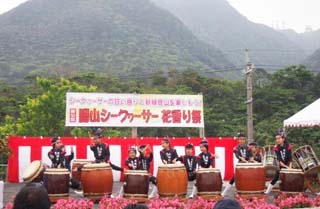 The core of this festival is hiking mountains around the event site, which runs both Saturday and Sunday, and enjoy Shiquasa flower blossoms.  Katsuyama is a small village located on the northern island, in Nago, and is best known for Okinawan citrus called Shiquasa, and for goats. Opening ceremonies for the festival are at 12:30 p.m. Saturday at the Katsuyama Community Center, 467 Katsuyama, Nago City.  The festival itself is free both days.

The area is surrounded by rich nature, and a lot of Shiquasa trees have been planted on the 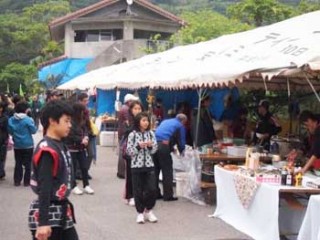 mountainside, and this is the season for viewing their greenery and enjoy the aroma of their flowers, as well as for picking fruits and eating.  Two mountain hiking tours and a Shiquasa flower blossom tour will take place. The hiking tours to Awa-dake, a 432-meter-high hill, and Furushi-dake, a nearby 391-meter-high hill, run both Saturday and Sunday.  Sign in for the tours, which begin at 9 a.m., is 8:30 a.m.  Participation costs ¥500.  The cost for Shiquasa flower blossom viewing, which runs both days until 3 p.m., is ¥100.

Organizers say the highlight of the festival are goat fights. People have heard about bull fighting in Uruma City, but this is goat fighting, which is totally different. Goat fighting is becoming very popular, and many people on and off the island come to Katsuyama to see the fighting show.  Surprisingly, someone is going to get very lucky with a chance to win a real goat by a lottery! The goat fighting starts at 1:30 p.m. both days, with a lottery at 2:40 p.m. to win the goat.  Tickets for the lottery are ¥300 at the door. 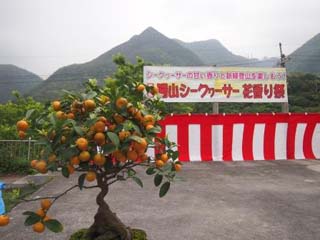 Shiqwasa is the main crop of the village and the focus of the festival.