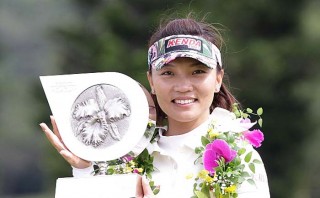 Teresa Lu smiles with her trophy after winning the 2015 Daikin Orchid.

27-year-old Taiwanese Teresa Lu powered her way to victory in the final round of the Daikin Orchid Ladies Golf Tournament, bumping a Japanese woman who had held the lead heading into Sunday’s action.

Teresa Lu finished 14 under par to overtake Japanese Lala Anai at the Ryukyu Golf Club in Nanjo City.  Lu wrapped up the title in a bow with her 7 under par 65, while overnight leader Anai, another 27-year-old, dropped to third at nine under par.  Rikako Morita slid into second place with an eight under par.

Okinawan golfers fared well at the 28th annual Daikin Orchid Ladies Golf Tournament, a Ladies Professional Golf Association event.  Hikari Kawamitsu finished in fourth place, highest among the local golfers, with an eight under score.  Mika Miyazato finished seven under to finish with a career best at Daikin Orchid in fifth place.  Shinobu Moromizato ended in 10th place 5 under par, Satsuki Oshiro finished 20th with a 2 under score, and Mamiko Higa was even par to finish 28th.

Among the professional Japanese players, Sakura Yokomine was in 16th place at 3-under, and Chie Arimura was 24th place with one under.  Amateur Hina Arakaki, a high school freshman at Konan High School, was.the only amateur player who made it to the final round, finishing in 33rd place with one over.

A total of 52 ladies went into the final day. Anai, who was on top going into Sunday’s play, has lost to Lu at two previous tournaments. Lu won the last tournament of the last season, beating Anai in LPGA Tour Championship action.  Anai had started Sunday with a one-stroke lead, then extended it with an eagle on the par-5 fourth hole.  Lu rallied with birdies to take over the lead.  She shot seven birdies from the seventh hole forward. “I was in good shape up to the eagle,” said Anai, “but after that I played it overly safe, and Teresa was as good as expected.”