Piyokara-kun is the very own mascot of Okinawan deep fried “karaage” chicken, who promises to be present at the Ti-da Blog 10th Anniversary Party.

The “Ti-da Blog”, the best known and largest blog service in Okinawa, is now a decade old, and is celebrating this weekend at Uminchu Wharf. 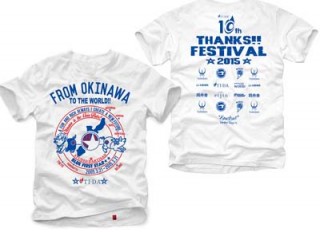 Commemorative T-shirts will be on sale at the event.

Ti-Da, which opened in 2005, means “Sun” in Okinawan dialect, boasts 100,000 members, 40 million page views a month and 5,500,000 individual users accessing the site each month. The powerful blog service grew up in Okinawa, and one of the reasons for its success is that it allowed businesses to use its services from the beginning. A huge number of businesses and services from Okinawa, as well as hundreds in other prefectures, use Ti-da Blog for expanding their own message.

Ti-da’s 10th anniversary party takes place at Chatan Fisherina Uminchu Wharf on March 21st and 22nd. The actual anniversary is the 21st, leading Ti-da bosses to create a festival concept as a chance for a real meeting of its users. Ti-da owner Hioshi Shimada says, “Blogs are just online connections, so we thought creating a real meeting place, people-to-people, is important.”

As a part of its anniversary celebration, Ti-da Blog will give awards to bloggers whose posts are judged to be most interesting or most popular.

Joining Ti-da at the festival will be the first Karaage Festival.  Karaage is another name for deep fried chicken, a food that Okinawans are so much in love with.  Live music and dance shows will take place both days from 11 a.m. ~ 5 p.m.  There will also be hand made crafts created by Ti-da bloggers. Ti-da is inviting everyone to join the festivities.

Okinawa is a special island where people take care of fostering people-to-people relationships with neighbors and customers, and check each others’ blogs. That in turn creates a high number of access and page views. Ti-da Blog is also special because their own staff post their own blogs about events taking place on the island, restaurants they recommend, fun places to visit and ideas on how to use blogs more easily and effectively.

The company wants to become more familiar and closer to Okinawans. Ti-da’s most popular contents are Okinawan life, gourmet, child raising, fishing, and tips on moving to Okinawa.