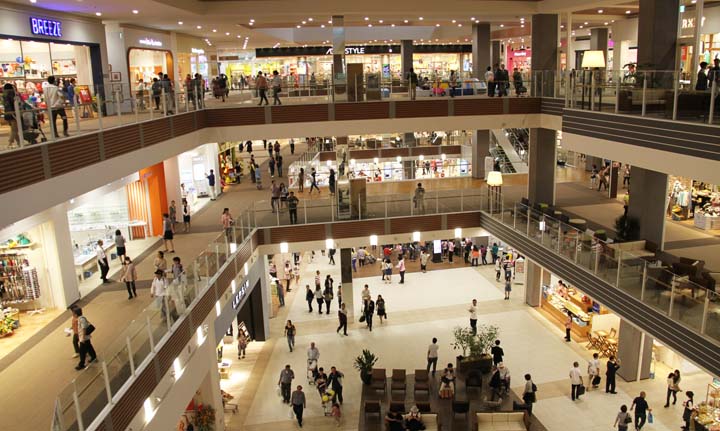 The largest shopping center in Okinawa Prefecture –a behemoth with more than 200 stores, 60 restaurants, a multi-plex theater and thousands of parking spaces—opens its doors Saturday in Kitanakagusuku on land that for decades was the U.S. military’s Awase Golf Course. 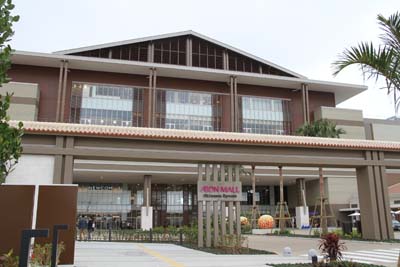 The main entrance to the mall.

AEON Mall Okinawa Rycom is located on Route 330 that spans Okinawa north to south, and at the junction with the east-west Okinawa Loop line that runs past the military’s Plaza Housing Area and in front of the new shopping mall.  The statistics alone are staggering and intriguing; that alone is enough to attract tens of thousands of visitors to clog the roads Saturday for the Grand Opening.

The Rycom Mall has some 220 specialty stores including 46 first-ever stores in Kyushu and Okinawa, and 70 first-ever stores on Okinawa.  The facility boasts the world’s largest food court, with more than 5,500 seats to serve 60 plus restaurants.  Add another 2,200 seats in the duplex gourmet world and there’s no shortage of satisfying any hunger challenge.

Rycom Mall covers five levels, with a 100-ton aquarium on the first level.  The aquarium features some 25 tropical fish species, with more than 1,000 fish in the tank.  A 2,600-square-meter welcome station is also on the first level, offering ATMs that accept overseas credit cards, as well as foreign exchange windows.  The station has storage areas for carry-on luggage, rest areas and places for drivers to relax in ‘bus waiting rooms’.  Throughout the Rycom Mall, free wi-fi is available, and there are signs, floor instructions and front pages in English, traditional and simplified Chinese, and Korean.

AEON Rycom itself is huge in and of itself, with three floors of shopping that will require 450 employees.  The AEON Mall Okinawa Rycom will have more than 3,000 employees to serve the hundreds of stores, restaurants and other activities.  AEON Mall Okinawa Rycom will be open 365 days a year, 8 or 9 a.m. to 11 p.m.  Other stores and restaurants will open at 10 a.m. and be open until 10 or 11 p.m. The Cinema will be open until midnight.  More than 4,000 parking spaces are available for customers around the complex, as well as another 260 spaces for bicycles.

The second floor has both AEON Rycom and restaurants, while Rycom Gourmet World is on the 3rd and 4th floors.  A Food Street is also on the fourth floor, and Rycom Sky Diner is on the 5th floor.  At the Rycome Stage ‘Air’ on the third floor, concerts and traditional art performances about Ryukyu and Okinawa will be held, but at night the Rycome Stage ‘Sky’ will feature live pop music shows and street performances brought by American artists.  The entertainment will be featured daily.