Golden Kings do it again – now looking at playoffs 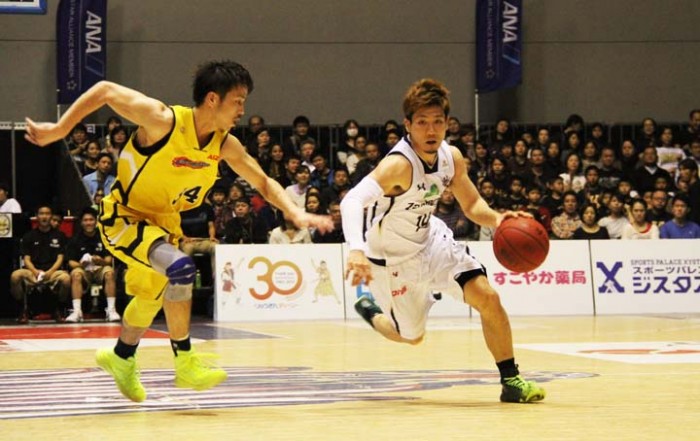 Ryuichi Kishimoto, #14, has been a reliable a top scorer for the Kings throughout the season. (File photo)

The Nara Bambitious were the victims of record, falling to the Ryukyu Golden Kings as they powered their way to another 40-game season, and there are still a couple of games to go in the race for the Western Conference title.

Nara went down 89-69 to Okinawa in their opening contest, with Ryuichi Kishimoto heading the effort with 16 points.  Draelon Burns was close behind with 15, while Naoto Kosuge added an even ten. Practically everyone else on the team – Anthony Kent, Anthony McHenry, Shigeyuki Kinjo and Morihisa Yamauchi — all were tied with eight points. 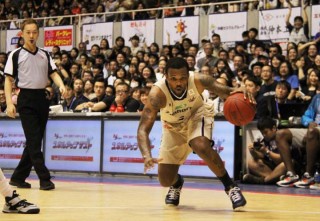 Head coach Tsutomu Isa praised Nara for excellent play in front of its home team, noting “we had been watching out not to let them get a boost, but we did let Nara play some good offense.”  Nara’s head coach, Ryutaro Onodera, thought his squad had a chance, but “although we had taken care of rebounds, our shooting skill was not good but we played hard.”

Sunday was all Okinawa, winning 89-54 against the 12-38 Bambitious, while they picked up a 41st victory against only nine losses with two home games remaining this weekend.  Still, the Golden Kings are a game behind Western Conference leading Kyoto.  Okinawa’s head coach summed the victory up noting, “offensive rebounds were one of our tasks, and we did well.  The number of turnovers was only 11, five less than we were shooting for.”

The Kyoto Hannaryz, meanwhile, continued their winning ways against the lowly Tokyo Cinq Reves, winning 101-57 Kyoto stands at 42-8 heading into the final weekend of the regular season.  Third place in the Western Conference is in the hands of the Hamamatsu Higashimikawa Phoenix, who eked out a 99-97 overtime win over the Shiga Lakestars in their opener, but fell 79-69 to Shiga on Sunday to remain three games behind in the conference at 39-11.  The Lakestars are in the playoff picture with a 33-17 record.

In the rival Eastern Conference, it was nip-and-tuck between the Iwate Big Bulls and the Akita Northern Happinets.  The two teams tied in their series opener when the Northern Happinets snatched a 67-58 win to even their records at ten losses apiece.  Sunday settled the score on who was the leader, as the Big Bulls showed no mercy, pounding Akita 73-55 to take a one-game conference lead with two games remaining.  Akita’s 39-11 while Iwate is 40-10.  The Sendai 89ers picked up a Saturday win over the Shinshu Brave Warriors, 93-83, then did it again, 96-83, on Sunday.  Sendai’s now 35-15, while the Brave Warriors fall to 19-31.