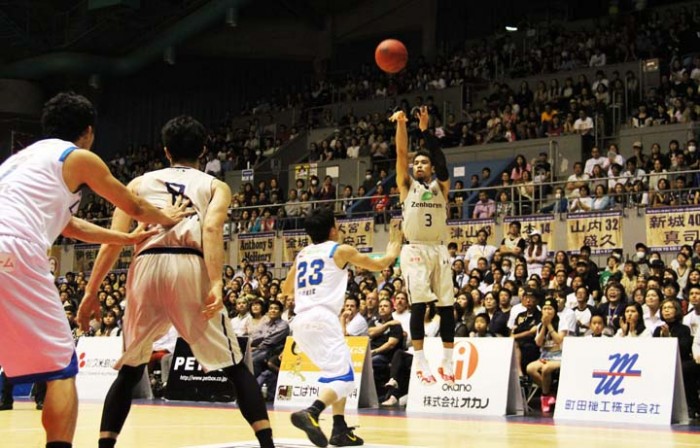 Narito Namizato lead the Kings to a win on Saturday.

There were some good moments and some not-so-good moments as the Ryukyu Golden Kings took the Basketball Japan League season down to the wire, delighting the home fans on Saturday and bringing them to tears Sunday with a loss to the visitors. 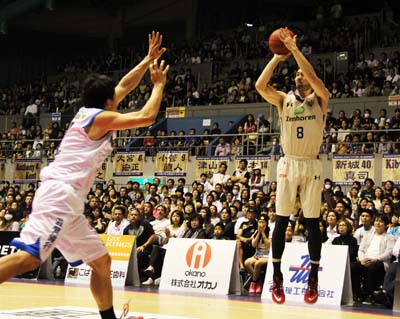 The Golden Kings made it look easy Saturday as they rolled past the Shiga Lakestars 64-50.  Narito Namizato lead the Okinawa scoring with 13 points, while Anthony McHenry dumped in 11, while also hauling in seven rebounds. Head coach Tsutomu Isa was elated his team “proved that it’s possible to suppress Shiga to 50 points, which shows our defense is adequate.”

That defense didn’t work for Okinawa Sunday as the Lakestars slammed the Golden Kings by an even larger margin, 77-60. Draelon Burns and Ryuichi Kishimoto each scored 13 points in the losing effort, which had coach Isa 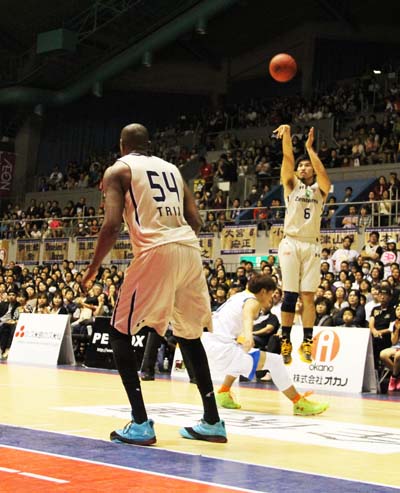 frustrated.  He told his players “even if a team is able to suppress the opponents in defense, it’s not possible to win unless one shoots.  I want the team to remember this in the playoffs next week.”  Kohto Tohyama, the Lakestars head coach, summed his feelings on the victory quietly: “I am delighted”.

The Lakestars head into the playoffs with a 34-18 record, while the Golden Kings finish the regular season at 42-10.  Okinawa couldn’t capture the Western Division crown, which went to Kyoto.

Kyoto was red hot going down the stretch, snatching away Okinawa’s record number of wins in a regular season the final weekend when they whipped the Osaka Evessa.  Kyoto swept the series 90-76 and 83-64 to register a new record at 44-8.  Okinawa had previously held the record of 43-9.  Osaka, with a 28-24 record, did qualify for the playoffs.

The Fukushima Firebonds, playing their first season in the Basketball Japan League, clinched a position in the playoffs with an 89-77 victory over the Shinshu Brave Warriors, then hammered Shinshu a second time, 104-89, to enter the playoffs with a 21-31 record.  The Brave Warriors closed the season with six straight losses.  The Takamatsu Five Arrows, meanwhile, split their series with Fukuoka Rizing.  They won the opener 102-86, only to lose the Sunday game 89-7. Fukuoka finished the year at 13-39.

The Toyama Grouses and the Gunma Crane Thunders also split on the final weekend, with the Grouses victorious 89-78 in the opener, and the Crane Thunders winning 73-68 in the season ender.   Even with the split, Gunma moves into the playoffs with a19-33 record, while Toyama slid into the playoffs with its 35-17 record. The Yokohama B-Corsairs closed the season on a winning note, dumping the Tokyo Cinq Reves 82-56 and 109-69.  It wasn’t enough to take an 18-34 record to the playoffs, while Tokyo ends at 5-47.

The Sendai 89ers swept its series with the Aomori Wat’s, 71-59 in the opener and 89084 in overtime on Sunday.  The wins were enough to send the 89ers to the playoffs with a 37-15 record, while Aomori also qualified with its 23-29 record. The Niigata Albirex BB scored its tenth straight win Saturday, overpowering the Iwate Big Bulls 67-62.  The Big Bulls bounced back to take a five-point 80-75 win.  Iwate goes to the playoffs with a 41-11 record, while Niigata remains in contention with a 36-16 mark.