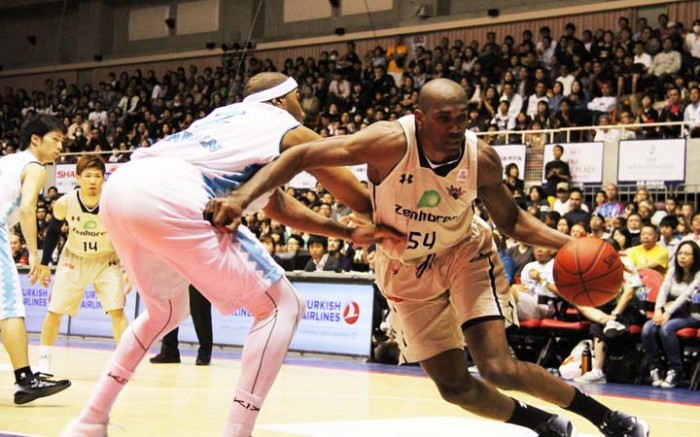 Kibwe Trim (#54) tried his best Saturday, but that was not enough to stop Hannaryz.

“We lost a game that we should have won” is how Okinawa head coach Tsutomu Isa summed up a stunning home court loss to the high-flying Kyoto Hannaryz in the opening game of their series. 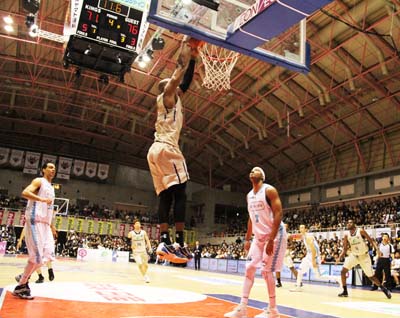 Anthony McHenry shows Kyoto’s Reginald Warren how to sink one.

The Golden Kings were stunned by the Hannaryz’ play, which saw five Kyoto players in double figures as Okinawa lost 79-73.  “We had a chance to win this game,” says coach Isa, “but we missed it”.  The Hannaryz were hot on the backboards, outrebounding the home team 43-28.  On the bright side, Ryuichi Kishimoto was equally hot in the scoring realm, picking up 24 points, including six three-pointers.  Draelon Burns had 18 in the loss, while Naoto Kosuge scored nine and Narito Namizato seven.  The loss sent Okinawa to 36-9, two games behind Kyoto in the Western Conference title race. 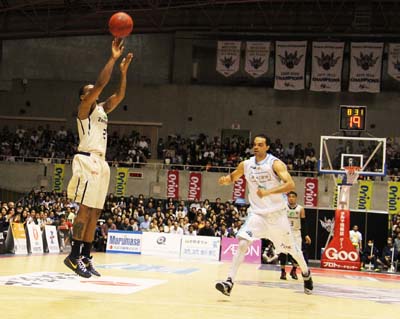 Draelon Burns scoring one of his 18 points on Saturday.

Irritated by the series opener loss in front of fans at Okinawa City, the Golden Kings roared back Sunday, scoring a 70-66 win that pushed the team back to only one game behind Kyoto.  Ryuichi Kishimoto was again on top of his game, scoring 16 points.  Teammate Anthony McHenry also scored 16, while Kibwe Trim picked up 11 and Hiromosa Omiya contributed 11. The Golden Kings are 37-9.

“The games on both days were very tough, lamented Kyoto head coach Honoo Hamaguchi. “On Sunday we were against the Okinawa’s heart, and Okinawa did not give up and stop for a moment.”  Golden Kings coach Isa said, “Our pride did not allow us to have a three-game losing streak and we managed to avoid that.  We won because we were able to play calm but with high spirits.”

Elsewhere in the TK bj-league, first year Fukushima put on a show on the road Saturday, upending the home crowd and the Yokohama B-Corsairs with a 106-91 victory.  A day later, the tables were turned as Yokohama trashed the Firebonds 98-63.  The games didn’t mean much in the playoff races, as Yokohama’s now 12-32, while Fukushima isn’t much higher in the standings at 17-29.  It was a good weekend for the Shiga Lakestars, sweeping a series against the Nara Bambitious 85-77 and 80-61. The wins move the Lakestars to 28-16, while Nara drops to 12-34.

The Saitama Broncos split a series with the Gunma Crane Thunders, winning the opener in Gyoda, Saitama Prefecture, 88-84, but losing the Sunday contest 72-64.  Saitama is only 5-39 including the Saturday victory, while the Crane Thunders are 1-28. The Niigata Albirex BB took a pair from the Toyama Grouses, but they needed overtime to capture the Sunday 96-87 win.  Niigata won the series opener 79-76. Niigata and Toyama now both have 31-15 records.

The Shimane Susanoo Magic worked a bunch of magic to sweep their series with the Osaka Evessa.  The Magic won the opener 83-73, and Sunday’s contest 69-62, to propel themselves to an 18-28 record.  Osaka is a notch ahead at 25-21 despite the losses. The Takamatsu Five Arrows split the weekend with the Oita HeatDevils, losing the opener 91-88, then bouncing back to win93-86 in the series finale.  Oita is now 17-29 in the middle of the conference pack, while the Five Arrows are 14-32.

The Iwate Big Bulls were on a weekend rampage, sweeping the Aomori Wat’s 80-69 and 77-71.  Iwate’s leading the Eastern Conference 37-9, while the Wat’s now even at 23-23.  The Akita Northern Happinets made the home fans happy, sweeping a series against the Shinshu Brave Warriors. Akita took the opener 99-94, then wrapped it up with a 104-83 win that boosted the season record to 36-10.    The Brave warriors fall to 18-26.  The Hamamatsu Phoenix won its series against Fukuoka Rizing, in Fukuoka Prefecture. The opener was easy, but it took overtime to win the Saturday series ender 91-87.  The Phoenix trail Kyoto and Okinawa for bragging rights in the Western Conference with a 36-10 record.