Get ready to grab the camera, pile family and friends in the car and put a trip to Ie Island on the calendar for this weekend to take in a million Easter Lilies rolling into full bloom on the northwest Okinawa island. 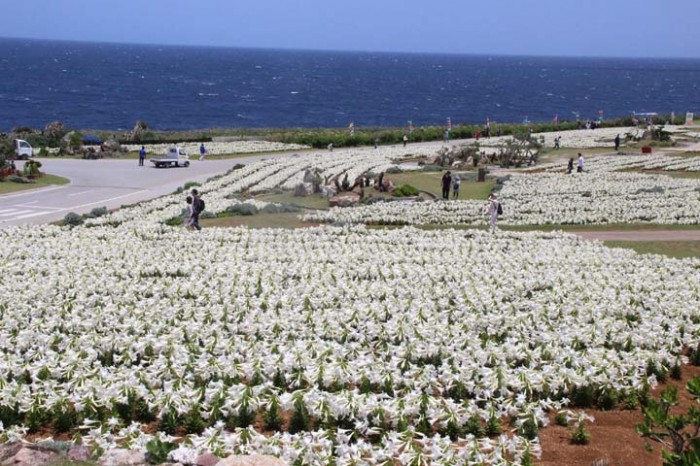 April 18th marks the start of the 20th annual Yuri Matsuri, the Ie lsland Lily Festival, showcasing more than one million teppoyuri, or Easter Lilies, that are a vibrant symbol of this small island. The tiny island of 5,000 inhabitants becomes a mini-metropolis for a couple weeks –the festival runs through Golden Week and ends May 6th— as tens of thousands of visitors pay homage to the fragrantly sweet lilies.

The festival features patches of different color variations of the lilies in addition to the dominant white.

Ie Island is located west of Motobu on the northwest coast just west of Nago City.  The festival builds to its crescendo during its final week, which coincides with the Golden Week, one of Japan’s principal holiday periods.  Ie Island swells with visitors flocking to the flowers, and to the action-packed entertainment schedule that includes taiko drum and Eisa dance performances at Ie Lily Field Park.

For all but the two festival weeks, Ie Island is a farming island, perhaps best known to Americans for the monument erected in honor of war correspondent Ernie Pyle, who was killed in a hail of Japanese machine gun fire on the island April 18th, 1945, during the battle of Okinawa.  The monument is only one of three tribute monuments permitted to remain following Okinawa’s 1972 reversion to Japanese control.  Tobacco is a major crop, while cattle are raised on the 20-kilometer circumference island.  Fishing and fish farms are also Ie Island enterprises.  Also a part of Ie Island life is a U.S. military airstrip manned by a small group of American servicemen.

Make no mistake, though.  Lilies are the centerpiece and visitors can wander the paths at will, stopping to take pictures, listen to the soothing sounds of the water surrounding the eight-square-mile island, and even pausing for a food and beverage break at one of the many vendor stands.  And it’s more than lilies. Ie Island is known for its daffodils, hibiscus and chrysanthemums, all floral delights.  To one end of the lily fields there’s even a small petting farm where youngsters enjoy ostriches, ponies, pigs, goats, chickens and more. 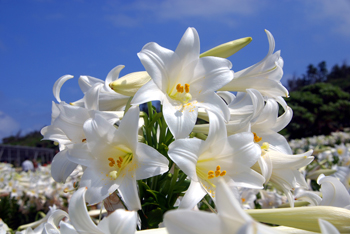 The pure white easter lily is the trademark of Ie Island.

Festival opening ceremonies are at 11 a.m. Saturday, with local brass bands and kids’ Sumo competition kicking off shortly after noon.  The following Saturday, the 25th, the festival gets Golden Week going in style with a Hanayakara dance performance (Ryukyu traditional style child dancers) at 1:15 p.m. and Suguru Ikeda music live at 7 p.m.   Sunday evening the 26th, Civilian Skunk is on stage at 6:30 p.m., and the Dynamites, the house band for the Gold Disc oldies club in Naha, are on stage at 7 p.m.  All entertainment is free.

Pop music performances by Okinawan young singers take place on Saturday, May 2nd, while Okinawan traditional music and folk songs fill the stage on Sunday.  On Monday, look for Eisa performances at the festival, and clown Kotora and a Hanawarabi Stage with Ryukyu traditional style children’s dancing, on Tuesday the 5th.

Visitors can make the trek to Ie Island any time—and there are no festival charges until the 18th—in a two-part process.  Travel along the Okinawa Expressway to the northern terminus at Kyoda, then on through Nago City on Highway 58.  Turn left to Motobu on Route 449, heading to the Motobu Ferry Port.  Ferries run frequently from Motobu to Ie Island daily beginning at 9 a.m.  At least five runs are available daily, but additional runs will be scheduled in the days ahead to handle Golden Week crowds.  The last ferries depart Ie Island at 5 p.m. or 6:30 p.m., depending on the day.