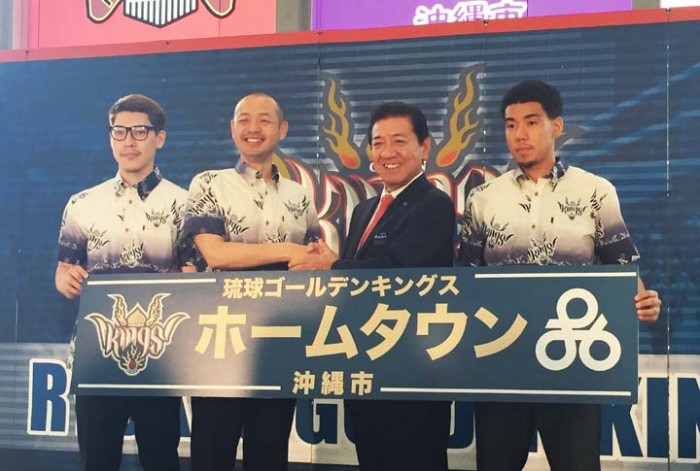 Golden Kings General Manager Tatsuro Kimura shakes hands with Okinawa City Mayor Sachio Kuwae as they announce the selection of Okinawa City as the official hometown of the team.

The team was required to select an official hometown after Japan’s two warring professional basketball leagues, the TK bj-League and JBL, reached an agreement to merge and start a new championship league from season 2016-17. The agreement was reached after the world governing body of basketball suspended the Japan Basetball Association resulting in Japanese national teams being banned from all international competition, including the Olympics.

The Golden Kings applied and expected o be accepted into the 1st division in he new top league, and for that it has to have a home court with a capacity for at least 5,000 spectators.

Negotiations between the Kings and Okinawa City were completed successfully resulting in Okinawa City agreeing to build a new basketball stadium in the Koza Athletic Park in Moromisato.

Tatsuro Kimura, the head of the Ryukyu Golden Kings, said at the press meeting, “We would like help boost and energize Okinawa City,” but was quick to stress that that the new hometown agreement would no mean that the team would abandon the rest of the prefecture. “Of course, the Golden Kings belongs to all of Okinawa, and we will rely on our fans all over the prefecture for their continuous support as before.”