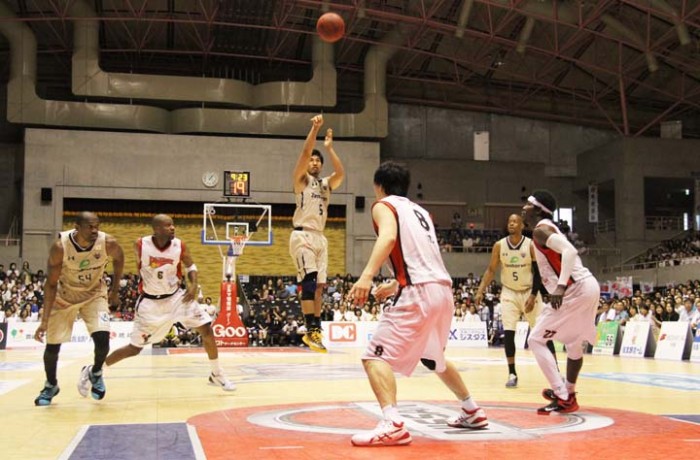 Shigeyuki Kinjo shooting for three but to no avail on Saturday.

It was sheer disappointment for the Okinawa fans as they watched their beloved Golden Kings struggle before losing twice to the Hamamatsu Higashimikawa Phoenix in the Basketball Japan League semi-finals. 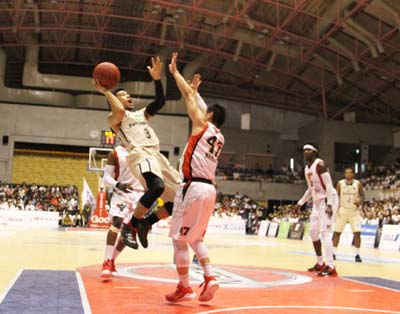 It was an exciting start to the semi—final series in Okinawa City as the two teams battled through four quarters all tied up, send the game to overtime.  It took an at-the-buzzer shot by Phoenix guard Nile Murry to propel Hamamatsu to a 71-69 win.  Okinawa’s Draelon Burns was lead scorer for his squad with 15, while Ryuichi Kishimoto and Narito Namizato both picked up 15.  Veteran Anthony McHenry popped in six points, but also pulled in 13 rebounds and had six assists.

Head Coach Tsutomu Isa was philosophic in the loss.  “We played patiently, but ruined ourselves,” he said.  “Easy shooting mistakes, defense rotation 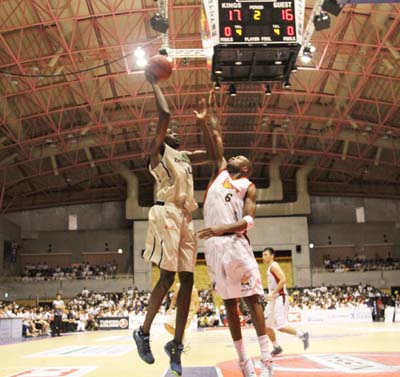 failures” were our problem.  Tomoya Higashino, the Phoenix bench boss, gave credit to his supporters who’d traveled from Hamamatsu to cheer his squad on.

Sunday’s chance for redemption was hot and cold for Okinawa, spurting ahead, then falling back.  In the waning minutes, Hamamatsu put on the pressure to pull out a 70-63 win that ended Okinawa’s season and sent the Phoenix to the finals in Tokyo.

Anthony McHenry led the losing Golden Kings cause with 15 points and nine rebounds, while Narito Namizato scored nine, Kibwe Trim eight plus 11 rebounds, and Draelon Burns picked up 12.  Okinawa ended its season at 44-13. Okinawa head coach Isa gave credit to the fans, saying “our players had trained hard for a year and worked for Okinawa in order to energize the local people. The fans also fought together with us, and we very much appreciate our fans for their support.  Phoenix coach Higashino said “dead or alive, we did everything we could do.  Anyone could win the game, but we trusted each other and played the game.

The other Western Conference semi-final series was filled with nail-biting moments. The Shiga Lakestars outplayed the Kyoto Hannaryz to win the opener 80-74, only to lose game 2 81-73, sending the series to a tiebreaker. The Lakestars won it, 25-20, to send Shiga to Tokyo. It was a sweet win for the 32-years-old  Lakestars coach, Koto Toyama, who was Okinawa’s head coach in 2013-2014.

The Niigata Albirex BB edged the Akita Northern Happinets 79-74 in their opener, but were pounded in game 2, 82-63, to set up a ten-minute tiebreaker.  The Northern Happinets outplayed the Albirex BB 19-18, to earn its trip to the Final Four.  The Iwate Big Bulls needed overtime to win their first game against the Aomori Wat’s 97-87, but turned the power sky high for an easy 111-57 smothering of the Wat’s in game 2.

The stage is set for Ariake Stadium in Tokyo.  The Northern Happinets take on the Iwate Big Bulls for the Eastern Conference title, while the Shiga Lakestars face Western Conference rival Hamamatsu in the other series.  The two conference winners then play for the Basketball Japan League championship.