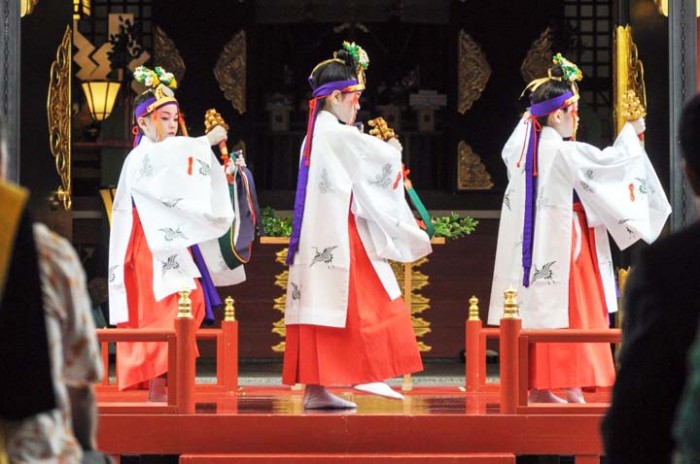 Nanmin Festival is the biggest festival of the year in the famed shrine.

Naminoue Shrine, one of the official shrines in the Ryukyu Kingdom, is hosting its annual spring festival this weekend. 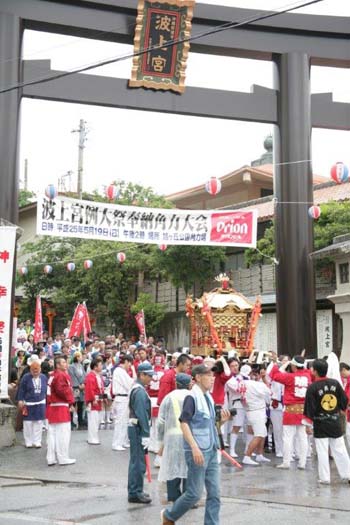 Portable shrine “Mikoshi” is carried out of Naminoue Temple.

Called ‘Nanmin’ by local Okinawans, the Nanmin Festival is the biggest festival of the year in the shrine, bringing together locals and tourists for two days of celebration both at Naminoue Shrine and at nearby Naminoue Beach.  Admission is free.

The festival runs Saturday and Sunday at Naminoue Shrine, 1-25-11 Wakasa, Naha City, and in surrounding areas of Asahigaoka Park and Naminoue Beach.  One of the festival’s highlights is a mikoshi parade with the carrying of a Japanese style miniature shrine that’s mostly an uncommon sight on the island.  Visitors will see others stopping in front of the main shrine to pray for the peace and prosperity of Okinawa.

The 21st Kids Sumo Competition kicks off at Asahigaoka Park at 1 p.m., followed at 1:30 p.m. by the Bukubuku Tea Ceremony at Naminoue Shrine.  Festivities intensify at 6 p.m. with the original drum group Ryusen and Naha-daiko presenting the 22nd traditional performing art show at Asahigaoka Park.

The traditional spring shrine ceremony, the Reidai-sai, starts festival operations Sunday morning at 10 a.m. at Naminoue Shrine.  The Mikoshi parade and dedication dance performance steps off from the shrine to Palette Kumoji Department Store on the south end of Kokusai-dori at 11:30 a.m.  Weight begins being tossed around at 2 p.m. with the 59th island-wide Okinawa Sumo competition at Asahigaoka Park, even as the beach tug-of-war finds spectators choosing up sides at Naminoue Beach.  The Japan Air Self Defense Force Southwestern Air Band rendition takes place at 5 p.m. at Asahigaoka Park. 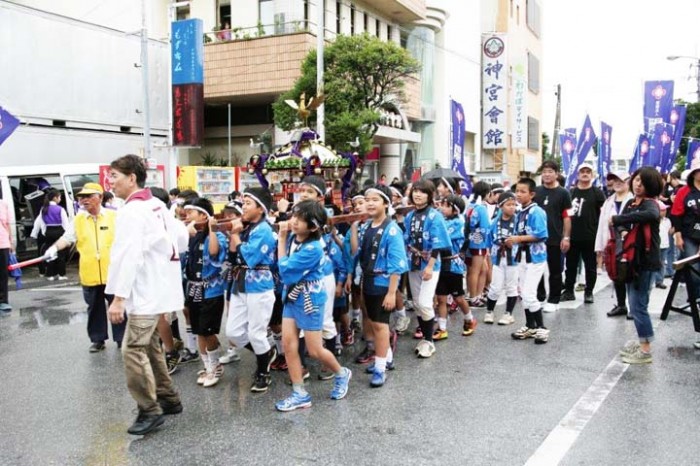 Children carry their own Mikoshi.