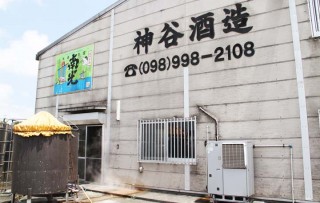 Kamiya Shuzo started its business in Kochinda, now part of Yaese Town in the southern part of the island, in 1949.  The founding family of the company makes awamori bearing the family name, with the current factory leader, Masaki Kamiya, carrying on tradition in the third generation.  Only four members of the family create awamori in the company, and all have worked on preserving the original taste while improving the quality.  As a result of their efforts they have been awarded a prize for the best Awamori at local Awamori competition for six times since 2003.

Hanahana awamori is available only through Kamiya website or straight from the distillery.

The company owner and factory leader Masaki Kamiya says, “I have been making Awamori for 20 years now. At first, I did not have any knowledge about Awamori, so I had to learn about what Awamori is. Those hard times I had been through helped me a lot for making it, and I have really enjoyed making Awamori. Our products are popular with local people, and it has a reputation of being easy to drink.”

The distillery is best known for its brand ‘Nanko’, and a limited brand ‘Kamiya’ that is only sold on the Internet.  The company is a member of Yaese Town’s Karabezi project that introduces and promotes agricultural produce and goodies from Yaese Town.

One of the projects they have engaged in has been to create new original products for the Karabezi project, for which they created an original Awamori made using yeast made from Yaese’s symbol flower marigold that proved to be very hard and delicate to produce. Marigold yeast was so rare and dedicate, it was very hard to take from the flower because one could take care of only one flower out of tens of thousands.  They had to pay extra attention to temperature to get black kouji-mold from marigold that is essential for Awamori making.

The result was a product, named ‘Hanahana’ that tastes refreshing with gently flower flavor and scent.  Hanahana is sold only on the company’s online shop at http://www.ukuimun.com/?pid=57668032 and at the Kamiya Shuzo distillery at 510-3, Aza Yonagusuku, Yaese Town, Their telephone number is (098) 998-2108.