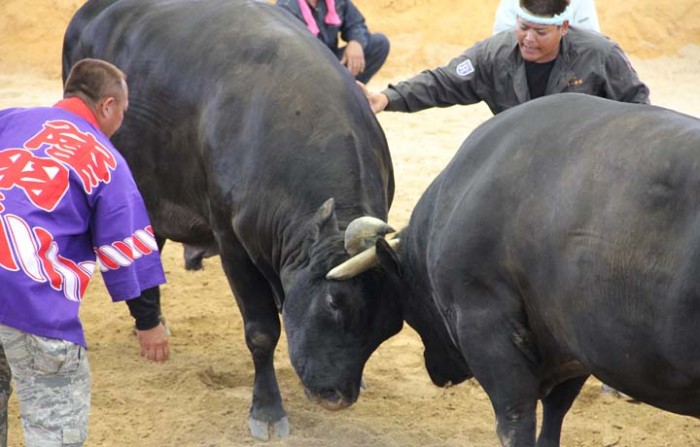 The bull handlers encourage and cajole their beasts throughout the match.

Bullfighting tournaments on Okinawa are a world away from those seen on television or in Spain or Mexico, but they’re equally exciting, and exotic, to watch.

Okinawa bullfights are exactly what the name says; two bulls going against one another, as opposed to a bull with his horns against a matador with a sword. Equally important for many spectators, bullfights in Okinawa do not usually end in bloodshed; both bulls walk away at the end of the entertaining match with the winner being the one who keeps on charging while the other turns tail. 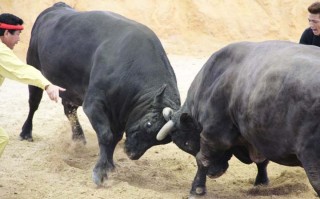 Okinawan bullfights are usually bloodless, and if by accident one o the bulls gets gored, the match is halted immediately.

One of the most important part of the fights are the bull handlers, who shout, goad, guide and encourage their respective animals in their fight shouting, running and jumping around as the bulls move without actually physically touching the animals.

Most bullfight tournaments nowadays take place at the Ishikawa Multipurpose Dome in Uruma City, where the next action takes place this Sunday starting at 1 p.m. http://goo.gl/maps/ueZJA.  Admission is ¥3,000 for men and ¥2,000 for women. Tickets for children in junior high and high school cost ¥1,000, and elementary school students and younger kids are free.

In this Fathers’ Day Tournament afternoon there are 11 matches. How long the whole tournament will last is impossible to say as some matches are over in seconds, while others can last up to half an hour with a pair of determined – and stubborn — bulls locking horns.

There’s also a special lottery event with special prizes, including a used car and big-size TV among other prizes.

All seats at the bullfights are non-reserved. Many people try to get to the front-row seats, but many experts advise choosing a seat from the 3rd to 5th row for the best overall view of the arena.

Bullfighting on Okinawa started in the early 17th century with farmers pitting their bulls against each other for fun. The fights reached the peak of their popularity just before the war when, according to local lore, some villages actually banned the fights because they said that farmers spent too much time at the matches instead of working the fields.

The first bullfights after the war were organized on Aug. 14, 1945, only a couple of months after the fighting ended.