Uruma City children have performed a modernized version of traditional kumiodori ‘Kimutaka no Amawari’ to enthusiastic crowds 208 times since 1999.

Every Okinawan knows the story of Amawari, the 10th lord of Katsuren Castle. Although much of the story is shrouded in legend, the main characters, Amawari, and his antagonist Gosamaru, the lord of Nakagusuku Castle, and their battle, in the aftermath of which the story is based, is historically true. 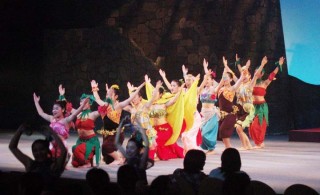 The storyline and music of the old kumiodori is thoroughly modernized.

According to the legend, Amawari rose to his position as the lord of Katsuren by accumulating wealth through opportunities from maritime trade with China. He also married the daughter of the King Sho Taikyu of Shuri that further increased his power.

However, according to history books, he had ambitions to become the king himself. Suspecting that this was the case, the King had a castle built in Nakagusuku, strategically located between Katsuren and Shuri, and appointed Gosamaru as its lord.

In 1458, Amawari started rumors of accusing Gosamaru of plotting to overthrow the king, and after convincing the king, led the royal army in an attack against Nakagusuku. However, according to the legend, Gosamaru did not want to fight against his kings’ forces, and rather committed suicide. Before killing himself, he placed a letter in his mouth, in which he swore that he had been loyal to the king. When Amawari cut Gosamaru’s head off and took it to the king in Shuri, the king found the letter, and realized what really had happened. The end result was that Amawari himself was executed.

A traditional kumiodori play concentrating on Gosamaru’s sons’ guest for revenge against Amawari, was created in the Ryukyu Kindom era for entertainment of Chinese envoys to Okinawa. ‘Kumiodori’ can be described as an Okinawa’s traditional opera dance or musical.

A modern version of the kumiodori, in which local junior and high school students of Uruma City play the roles with the support of many local people, was created in 1999.  The show is played with modernized storyline, music and dance based on the traditional kumiodori.  The project was started in order to inspire local children and promote the region.

The creators of the show expected it to be a one-time-only event. However, the children who performed in the original play requested a re-run, and the show with a new cast of acting children every year has played 208 times since 2000 with 130,000 people having seen the show over the years.

In addition, the show has visited Tokyo, Fukuoka, the historic Kurashiki City in Okayama Prefecture, Morioka in Iwate Prefecture and Hawaii in 2008.  The project has attracted much attention to its educational aspects from in and outside of the island, and as a local area development activity.

All seats are reserved with tickets for special seats costing ¥2,800, and general seating for adults ¥2,500. Tickets for high school age and younger children cost ¥2,000 yen. Tickets are available at Amawari Roman-no-Kai Office, at 2925-1 Henna, Katsuren, Uruma City. Their email is amawari-roman@woody.ocn.ne.jp