From Havana to Henoko, democracy and genies 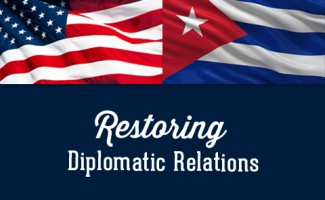 On July 20th, Japan’s Ocean Day, known as “Umi No HI”, the Cuban flag was raised in Washington D.C. as the Stars & Stripes was raised in Havana.

For the first time since 1961 when diplomatic ties were severed between the two countries were these flags flown in each others’ capitals.

Pope Francis assisted in breaking the ice. Many are happy, yet many are worried that this new diplomatic initiative will only strengthen the present Cuban regime without implementing the any reforms for restoring democracy to this island nation.

As reported by the New York Times (By Asam Ahmed and Julie Hirschfield Davis on July 20, 2015),

“The genie is out of the bottle,” said Carlos Alzugaray Treto, a former Cuban diplomat who is close to President Raúl Castro and his brother Fidel, the country’s longtime president. “And once it’s out, you’re not going to be able to put it back in.”

Cuba’s foreign minister railed against the United States’ travel restrictions, trade embargo and presence at the military base at Guantánamo Bay.

Cuban official Bruno Rodríguez said those policies must end before the two countries could bring their grudge to a close, and lend “some meaning to the historic event that we are witnessing.” Rodríguez invoked the “nefarious consequences” of the Platt Amendment of 1903, a series of conditions written into the Cuban Constitution that gave the United States sway over Cuban affairs and the right to establish military bases in Cuba.

Living in Okinawa, its time to “make a wish” for sanity, with family in Cuba and Miami, one cannot help but compare the situation here, the stalemate concerning the Futenma MCAS relocation to Oura Bay in Henoko, and the recent commentary by leading politicians in the USA, who demand that the democratic principals and human rights of the Cuban people be not only restored but guaranteed.

Japan is still suffering from the consequences of the San Francisco Treaty of 1952. Has Japan been artificially suppressed by the victorious allies? Has this dependency created the un-natural sub-subservient vassal state relationship? Are these the “nefarious consequences” of the US-Japan Security Treaty?

The genie is out of the bottle both in Havana and Tokyo. Yet, discussion and dialogue are key elements to diplomacy. Havana and Henoko have more in common than meets the eye.

When the dust settles, we can hope for a stronger and healthier US-Japan Alliance and friendly ties with Cuba, only 90 miles from the US. It is time that democracy be restored in Cuba and allow for transparency, reconciliation leading towards a sustainable 22nd century.

As Pope Francis, quoted the Earth Charter Initiative, I would pray that from the Ryukyu Islands to the Canary Islands and islands in between, take a moment to endorse the Earth Charter as a first steps to forge a future for the next generations, renouncing war on this very, very fragile blue planet of ours.

For information about those pro and against the new diplomatic ties please see the following:
1. http://thecubanhandshake.org/
2. http://canf.org/journal/press-releases/