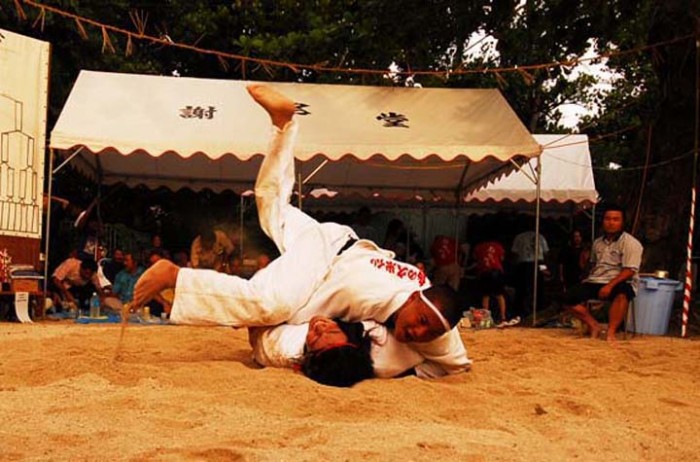 Okinawan sumo bouts take place on sand and with no ring or boundaries, and the aim is simply to topple the opponent on his back.

Because of the approaching typhoon Halola, the Kin Festival has ben cancelled.

As the high season for local festivals gets going, Kin Town is organizing its 36th annual summer festival on July 25th and 26th. The Kin Town festival is knows for its Okinawan sumo tournament known as kakuriki, a variety of the Japanese grappling sport seen on national TV six times a year. 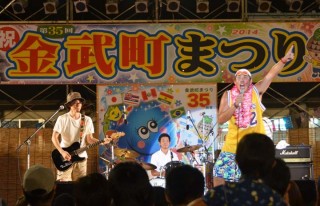 Unlike the Japanese sumo, kakuriki has no marked ring on an elevated platform, but is done on any sandy area and has no boundary. Actually, the bouts originally took place on beaches. The aim is to throw your opponent to the ground. Wrestlers also wear a heavy gi like karate and judo players instead of the long belt sumo rikishi are known for. Before the start of the bout, opponents take a good firm grab from another’s belt with one hand and wrap the other around the body of the opponent.

Other events include a Yukata (light kimono-like summer wear) contest, and in addition, the first 100 women coming to the festival starting at 4 p.m. and wearing Yukata get a special present on both days of the festival.

For children, there is a free bouncy castle and Ryujin Mabuya hero show. Live music performances, traditional performing arts by senior groups and children’s dance groups are on schedule on both days as are fireworks that close the event.

The festival runs from 10 a.m. to 9 p.m. on both days at Kin Town Athletics Field, at Kin Town Chuo Community Center at 7758 Kin, Kin Town. Admission to the festival is free. For parking there is a temporary parking lot at Kin Fishing Port from where a free shuttle bus service is available between 1 and 9:30 p.m.