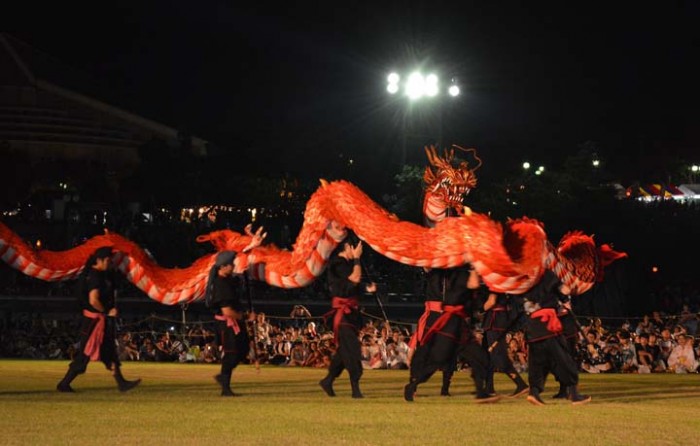 Tedako Festival showcases many historical events that are not seen anywhere else.

Urasoe City prides itself of being the original capital of the kingdom of Chuzan before Okinawa was united under one ruler in Shuri in the late 14th century. And even after the unification, the ancient Urasoe Castle site in Urasoe became the final resting place for several kings of the Ryukyu Kingdom. 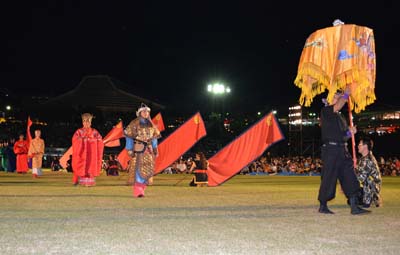 Chuzan King Eiso who held his court in Urasoe arrives at the festival grounds with his entourage at a historical proceeding of a picture scroll enactment on Saturday,

As befitting to its long and proud history, ancient tales and long line of rulers, some of the highlights of the weekend’s 38th Tedako Festival is the historical proceeding of a picture scroll enactment of the three great kings of Urasoe on Saturday, and traditional performing arts on Sunday, both on the main festival grounds at the Urasoe Athletic Park (Map: https://goo.gl/maps/zH4Vi).

The festival kicks off on Friday afternoon with a pre-festival block party on Yafuso Street from 2 to 9 p.m. The street is closed for traffic during the block party that features street dance, performers and plenty of food and cold drinks. Local youth groups are organizing a parade for the block party during which the groups show their skills in carrying and controlling ‘hatagashira’, tall, hard-to-control bamboo poles sporting banners. 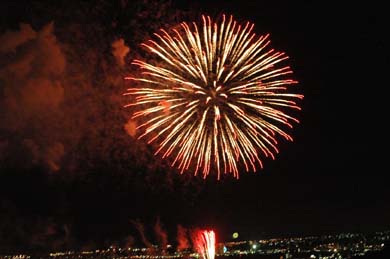 Tedako Festival showcases many historical events that are not seen anywhere else.

The main festival takes place on Saturday and Sunday at Urasoe Athletic Park and, besides the historical performances, features live music, entertainment and all the traditional Okinawan festival trappings of food and drink. The program ends with fireworks on both days starting at 20:45.

Tedako means ‘children of the sun’, and the festival pays homage to a powerful King Eiso, the ruler of Chuzan who had his court in Urasoe. The festival begins with lighting of the fire from the sun at the Iso Castle Ruins Park.

On both days, the festival program includes sports and competitions at various locations in the city. On Saturday, there are a Senior Citizen’s Club Karaoke Contest and Urasoe Cultural Association’s stage performances throughout the day at Tedako Hall. The Flame Lighting Ceremony at Iso Castle Ruins Park gets under way at 2 p.m. Programs on the main stage start at 5 p.m.

On Sunday, Dragon Boat Races are held at Makiminato Fishing Port, A footsal, kickball and children’s sumo tournaments are held starting at 9 a.m. at facilities in the Athletic Park. Events on the main stage start again at 16:50.

Organizers advise visitors to the festival to use public transportation as there is no parking available at the venue..